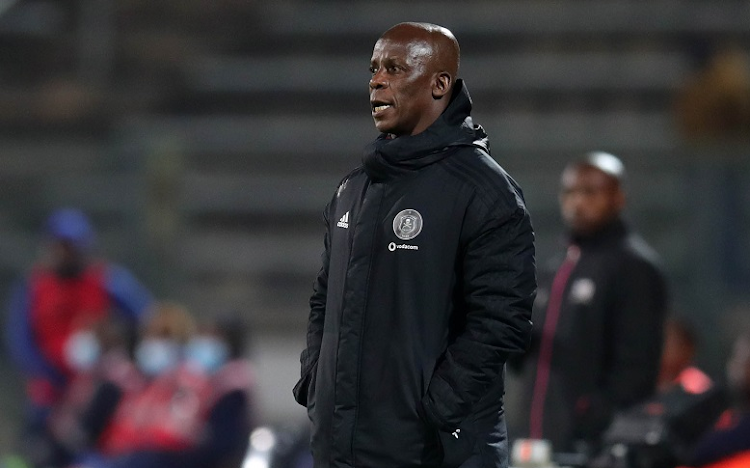 Orlando Pirates co-coach Mandla Ncikazi during their DStv Premiership against Supersport United at Lucas Moripe Stadium in Pretoria on May 30 2022.
Image: Samuel Shivambu/BackpagePix

Orlando Pirates co-coach Mandla Ncikazi said that he is waiting to learn his fate from the club's bosses after a topsy-turvy campaign and disastrous DStv Premiership season.

On Monday the Buccaneers rounded off their 2021-22 season when they were nailed 2-0 by SuperSport United at Lucas Moripe Stadium in Atteridgeville, finishing sixth on the DStv Premiership table.

“For me now, it is about digesting the poor performance and poor results and wait. Whatever happens next will happen.

“It is a disappointing result. Supporters, fans and management of Pirates do not deserve this. The result summed up not a very successful season by the team and one has to apologise for such a season. There is no justification of anything.

Orlando Pirates wrapped up one of the seasons they will want to forget quickly with a 2-0 DStv Premiership defeat to SuperSport United at Lucas ...
Sport
3 weeks ago

“We were the better team against SuperSport and created better opportunities but the outcome of the match is different. We lost the match, we got a red card [Happy Jele in the 66th minute] and I am disappointed.

“I don’t think there is draw we played with less possession and let us have self-reflection. We created the better opportunities but United scored their goals and that’s what makes me more disappointed out of the whole scenario.”

Ending sixth Pirates will not play in continental club competitions after reaching the final of the Confederation Cup this season. What will also rankle the Bucs family is that they finished below fifth-placed arch-rivals Kaizer Chiefs.

When Pirates returned from their penalties Confederation Cup final defeat to Morocco's RS Berkane in Nigeria, they had three rescheduled Premiership matches left to complete and a chance to sneak second place and the Caf Champions League if they won them all.

They convincingly defeated Maritzburg United 4-1 at Orlando Stadium. But the wheels came off when they were held to a 2-2 draw against Royal AM in Durban on Friday. SuperSport sealed the Sea Robbers’ fate on Monday.

“I am just a small, small drop in a big ocean and, yes, as a coach you know what’s expected of you and you know the objectives of the club when you come in. And the bottom line is we did not meet those objectives.

“As for me personally, for the failure of the whole group there is no excuse and I am not blaming anybody except myself.”

Pirates player Fortune Makaringe opened the scoring when he unwittingly beat his goalkeeper Richard Ofori with a headed own goal in the early stages.

The Buccaneers dominated the midfield and Ncikazi is right when he says they were wasteful. Kwame Peprah and Deon Hotto missed opportunities that could have swayed the result Bucs’ way.

Late in the second half Jele was red carded for pushing goal-bound Thamsanqa Gabuza inside the box. United star Gamphani Lungu stepped up and took the game beyond Pirates with the spot-kick.