Swallows off to winning start in PSL playoffs 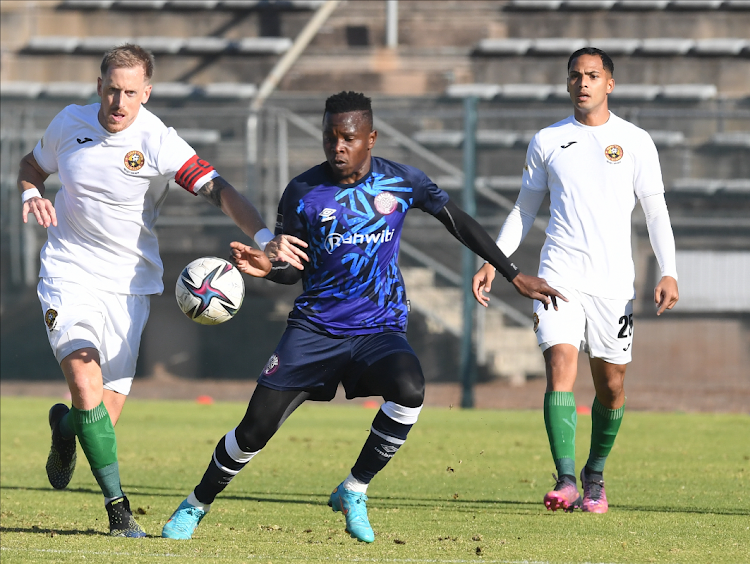 Michael Morton of Cape Town All Stars and Mbulelo Wambi of Swallows during the PSL Promotion Playoff match at Lucas Moripe Stadium on June 1 in Pretoria.
Image: Sydney Seshibedi/Gallo Images

Swallows FC kicked off their mission for top-flight survival via the playoffs on a good note, defeating GladAfrica Championship side Cape Town All Stars 2-1 at Lucas Moripe Stadium in Atteridgeville on Wednesday.

Former Maritzburg United striker Justice Figuareido scored late in the second half for Igugu leKapa while Joseph Mhlongo's late goal won it for Swallows after Mbulelo Wambi had equalised for the Dube Birds in the second half.

After their uninspiring campaign where they ended in second-last place in their second season back in the DStv Premiership, Swallows hope to save their status in the promotion-relegation playoffs.

However, their start to the mini-league didn't inspire confidence as they had to fight hard for the victory against a side that finished third in the second tier.

Figuareido gave the visitors the lead five minutes before the break, heading in a cross by David Matlala. It was not the best cross, but poor defending by the Premiership side played a part in the ball ending in the back of the net.

Chiefs miss out on continental football, Swallows go to the dreaded play-offs

Swallows will play in the promotion play-offs and Kaizer Chiefs will miss continental football next season after they played to a lively 2-2 DStv ...
Sport
1 month ago

In the second half, Swallows upped the tempo to some extent and put pressure on All Stars, who looked like they planned to defend the first-half goal for the rest of the match.

The result is a further blow for the Allan Freese-coached All Stars as they have now lost their two opening matches of the mini-league.

All Stars lost 3-1 to University of Pretoria on Sunday and they are in a precarious position with two games to play.

The mini-league will take further shape when Swallows and Tuks meet at Tuks Stadium on Saturday (3pm). Tuks are leading the standings on goal difference.