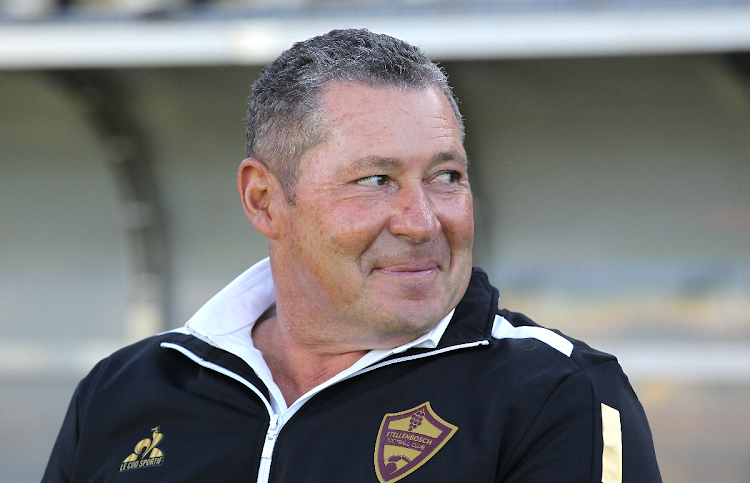 Steve Barker has been named coach of the month for May.
Image: Shaun Roy/BackpagePix

Stellenbosch FC coach Steve Barker and Cape Town City goalkeeper Hugo Marques have been named DStv Premiership coach and player of the month for May with Thabo Matlaba of Royal AM walking away with the goal of the month award.

Barker, who guided his side to a fourth-place finish in the recently concluded Premiership season, saw his side go through May unbeaten with impressive wins over champions Mamelodi Sundowns and Cape Town City.

Stellies also held Swallows, Maritzburg United and SuperSport United to draws as they ended the season strongly with two wins and as many draws.

Public Voting for the Goal of the Season will open later today on https://t.co/PzR59r1S72 pic.twitter.com/Hok7hFC6VL

Angolan goalkeeper Marques crowned his debut season by taking home the Premiership player of the month award for May to add to the goalkeeper of the season award he won at Sunday's PSL Awards.

Marques kept four clean sheets in City’s five outings in May, which hugely contributed to the Citizens’ securing a place in the Caf Champions League next season.

WATCH | Sundowns show off their pile of trophies in Mamelodi

Hot on the heels of completing a treble and clean sweep of domestic trophies at the weekend, some Mamelodi Sundowns players interacted with their ...
Sport
3 weeks ago

Matlaba won the Premiership goal of the month for his superb strike in his side’s 2-2 draw against Orlando Pirates last week.

Matlaba’s goal will be added to the list of monthly goals in contention for the Premiership goal of the season award.

The voting of goal of the season, by fans and the public on www.psl.co.za, will open later on Thursday and close on June 10 at midnight.