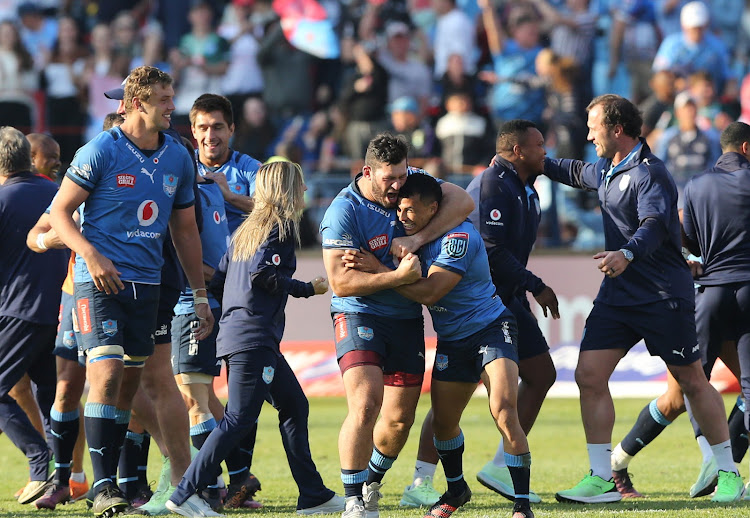 Four minutes after the hooter had sounded and with extra time looming, the Bulls found a way.

About 23,000 fans at Loftus were preparing for added time as the two teams could not be separated on 27-27 but flyhalf Chris Smith positioned himself in the pocket to hammer home a decisive drop goal.

With that kick in the dying minutes that shattered the hearts of the Sharks and Smith the Bulls booked a place in the semifinals of the United Rugby Championship (URC).

Sitting tantalisingly on 27-27, the Bulls worked with a number of carries from their forwards and their patience paid off handsomely with Smith nailing the kick as they won the match 30-27.

With this win, the Bulls will take on the winner of the other quarterfinal match between Leinster and Glasgow Warriors that kicked off late on Saturday afternoon at the RDS Arena in Dublin.

The Bulls were forced to put in a strong performance in the second half to eventually beat the 14-man Pumas 31-26 in an eventful Currie Cup clash at ...
Sport
4 weeks ago

This victory is significant for the Bulls as they managed to down a star-studded Sharks side that boasted Springbok campaigners like Lukhanyo Am, Siya Kolisi, Makazole Mapimpi, Thomas du Toit, Bongi Mbonambi and Ox Nche.

Sharks coach Sean Everitt also had the undoubted talents of emerging Springboks in the form of Aphelele Fassi and Jaden Hendrikse in his starting line-up.

In fact, the Sharks started this match with what could be the Bok front-row of Ox Nché, Mbonambi and Du Toit who were up against Mornay Smith, Johan Grobbelaar and Gerhard Steenkamp.

In the dressing room, White also has the calming influence of veteran and former Bok pivot Morné Steyn.

The visitors got the scoreboard ticking when Curwin Bosch scored his penalty but the Bulls responded swiftly with Madosh Tambwe powering his way over the try line after combination play with Canaan Moodie.

The Stormers will host Edinburgh and the Bulls the Sharks in the quarterfinals of the United Rugby Championship (URC) next month.
Sport
1 month ago

The Sharks showed they were not in the capital city on holiday as they retook the lead almost immediately when Springbok hooker Bongi Mbonambi scored a try after a driving maul.

After 35 minutes, the Bulls found themselves with a slender three-point lead as a result of two penalties in quick succession by Smith after the Sharks were penalised for poor discipline.

It took five minutes for the Bulls to make their mark on the second half when skipper Marcell Coetzee put them in front with their second try after overpowering the defence.

A few minutes later, the Bulls took full control of the match when Cornal Hendricks received the ball on the left wing to beat the Sharks defence and score behind the poles.

Jaden Hendrikse replied for the Sharks and they levelled matters five minutes from time when Sikhumbuzo Notshe was at the end of a wonderful forward move by the Sharks.

But, Smith had the final say with that drop goal.

Bulls Currie Cup coach Gert Smal says his side could be understrength for the top-of-the-table bout with the Cheetahs next month.
Sport
4 weeks ago