‘Baseless’: Caf hits back at Mosimane comments on ruling body and Motsepe 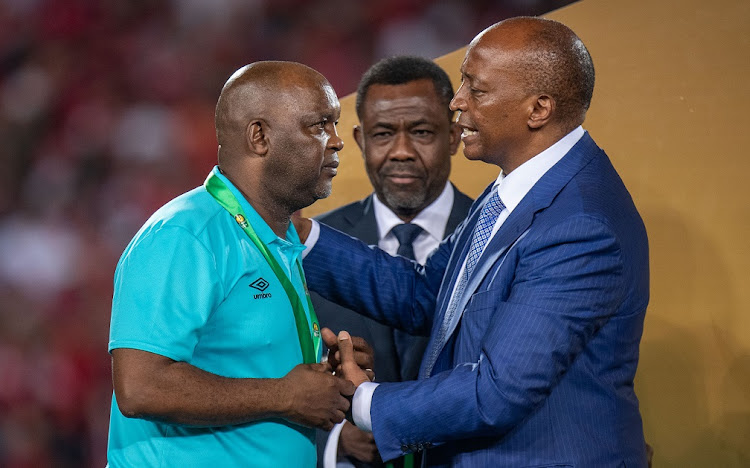 The Confederation of African Football (Caf) has hit back at Al Ahly coach Pitso Mosimane over some of his statements made about the continental ruling body and its president, Patrice Motsepe.

Mosimane has made suggestions that Motsepe — with whom he has had a few run-ins since leaving the Caf president’s club, Mamelodi Sundowns, to join Ahly — had a role to play in last week’s Caf Champions League final being staged at the home of Wydad Casablanca.

Ahly lost 2-0 to Wydad in front of a hostile home crowd at a packed Stade Mohamed V in Casablanca last Monday. The withdrawal of Senegal as a bidder for the neutral venue Champions League final left the choice of Morocco.

Caf’s decision was still controversial as it was made in the midst of the semifinals, when it was clear Wydad would reach the final.

Caf senior official Luxolo September responded in a statement. Under a heading, “On whether the Caf president single-handedly took Champions League final to Morocco”, September said: “There was a process that started in January 2022 of selecting a venue for the final.

Pitso: ‘If you play at a neutral ground you can talk about winning or losing’

“Four countries submitted a bid: Nigeria, SA, Senegal and Morocco. Nigeria and SA did not submit documentation that met the requirements.

“With Morocco and Senegal left, the latter withdrew, leaving only Morocco. Caf and Caf president Dr Motsepe were duty-bound to implement the outcomes of this process. It is common cause that Egypt did not submit a bid.

“While I understand that Dr Motsepe is the president of Caf and therefore the face of the organisation, it is inherently unfair and wrong to say that one person, for whatever reasons, took a decision alone to advance whatever reasons. It is just illogical and untrue.”

He wrote: “On the comments made on Afcon Cameroon 2021 and Club World Cup 2022 by coach Pitso, it is common cause that Caf had set the date for the Afcon 2021 in 2019.  This was at least two years before Dr Motsepe was elected Caf president.

“The date for the Fifa Club World Cup was announced in November 2021 — when everyone knew already the dates for the Afcon 2021 tournament. This was less than two months before Afcon 2021 in Cameroon.

“Caf does not schedule dates for the Club Wold Cup — it is a Fifa Competition.  The comments by the coach therefore are baseless and not informed.”

Most of the Ahly players and technical team removed their silver medals after losing the Champions League final immediately after being presented them by Motsepe. Mosimane allegedly, in a tense exchange with the Caf president, said: “So, this is what you wanted.”

In his post-match press conference the coach said: “I suppose the powerful got what they wanted in the end.”

Mosimane also took a swipe at Caf's leadership in a press conference in Johannesburg on Friday, saying the Caf Champions League is 50 years behind its European equivalent, questioning substandard venues and the lack of video assistant referee (VAR) in the group stages.

“We need to improve. Have you seen the training pitches that we train on in the Champions League?

Mosimane and Sundowns and Motsepe have had running battles over contractual issues since the coach left the Pretoria club to join Ahly in late September 2020.