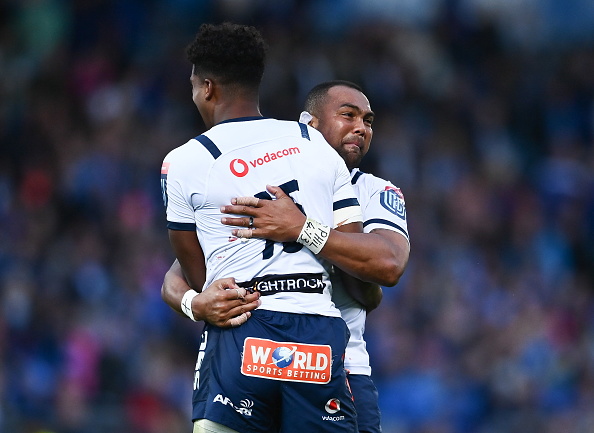 Cornal Hendricks and Canan Moodie of the Bulls celebrate their United Rugby Championship semifinal win over Leinster at the RDS Arena in Dublin.
Image: David Fitzgerald/Sportsfile via Getty Images

The Bulls produced a stunning performance to narrowly upset fancied Leinster 27-26 in their United Rugby Championship (URC) semifinal clash at the RDS Arena in Dublin on Friday night.

Very few gave the Bulls any chance of returning from Dublin with a win but Jake White’s men caused a monumental upset to book a place in the inaugural URC final against the winner of Stormers and Ulster in Cape Town on Saturday.

By defeating overwhelming favourites Leinster, who finished top of the standings during the regular season, the Bulls have also became the first SA team to win in Dublin in the URC this season.

The home side took the lead after ten minutes through a try that was finished by Dan Sheehan and moments later the Bulls thought they had scored their own but it was disallowed after Canan Moodie lost control of the ball on the line.

The Bulls recovered from the Moodie disappointment a few minutes later with a touchdown by the imposing Johan Grobbelaar, who was named man-of-the-match, after a penalty at the breakdown.

Four minutes after the hooter had sounded and with extra time looming, the Bulls found a way.
Sport
3 weeks ago

The Bulls increased their lead after 25 minutes when inspirational captain Marcel Coetzee crashed over the line with Chris Smith putting away his second conversion.

Shortly before the halftime break, Leinster roared back into the game through a try by Robbie Henshaw with Ross Byrne putting away his second successful conversion.

Thirteen minutes into the second half, the Bulls opened a ten-point gap with a penalty try after their maul proved too strong for Leinster. It also resulted in a yellow card for captain Ryan James.

Leinster registered their first points of the second half after 96 minutes with Rory O'Loughlin’s unconverted try to narrow the gap to five points but the Bulls pulled away shortly afterwards with a penalty from veteran kicker Morné Steyn.

The home side scored a try in the dying minutes through Cian Healy that was converted by Jonathan Sexton but they fell one point short of the Bulls who romped to the final.