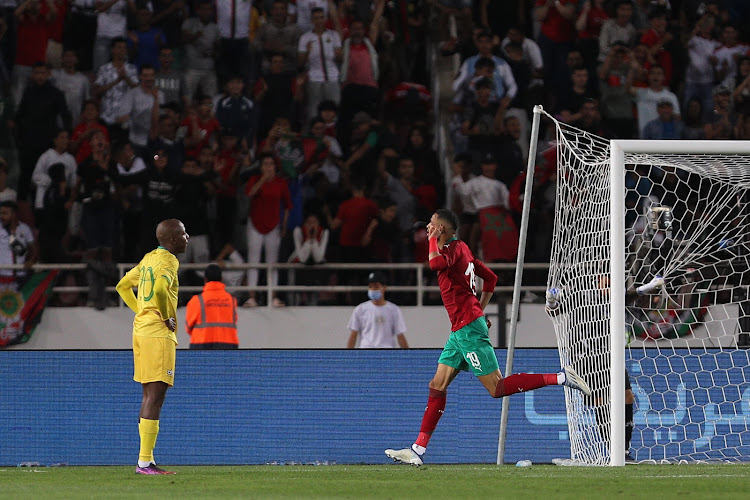 Youssef En-Nesyri of Morocco celebrates scoring the equaliser during the 2023 Africa Cup of Nations qualifier against SA at the Stade Prince Moulay Abdallah in Rabat, Morocco on 9 June 2022.
Image: ©Nour Akanja/BackpagePix

It was a low-key return for Bafana Bafana as they touched down with no fanfare and a single sound of the vuvuzela at OR Tambo Airport on Saturday morning.

The players looked dejected and tired from the long trip from Rabat where they were defeated 2-1 by Morocco in the opening match of the 2023 Afcon qualifiers during the week.

Despite the result, coach Hugo Broos’ young team put up a brave fight and they almost caused what would have been one of the biggest upsets in the qualifiers.

Players and the technical team did not do any media interviews as they were whisked away to the bus but Safa CEO Tebogo Motlanthe was on hand to say it was a good trip.

Bafana Bafana coach Hugo Broos says he was not disappointed with the performance in the defeat to Morocco in the 2023 African Cup of Nations ...
News
2 weeks ago

“It was a good trip overall, players gave their best, the atmosphere in Morocco was incredible, the stadium was full and the fans were loud and behind their team even when they were losing,” he said.

“The boys held their own, given that there were two players making their debut. We could see the boys played well and the coach knows that we must finish the job against Liberia and he is confident that we can still qualify for next year’s Afcon tournament.

“I have spoken to the coach and said to him that we must remain focused and beat Liberia at home and away in September and that’s where our qualification lies.

“And off course it also shows that we can beat Morocco when they come to SA because we really surprised them and everyone thought that Morocco were going to walk all over our team. The boys fought hard but it was not to be,” said Motlanthe.

A “late cancellation” by Iran has left Bafana Bafana without a friendly match to play in the June Fifa international date, SA Football Association ...
Sport
2 weeks ago

Bafana did not get a friendly match to replace Zimbabwe on Tuesday and their next assignment is a back-to-back, home and away encounter against Liberia in September.

SA will need to win those two matches if they harbour any chances of taking part in the tournament in Ivory Coast next year.