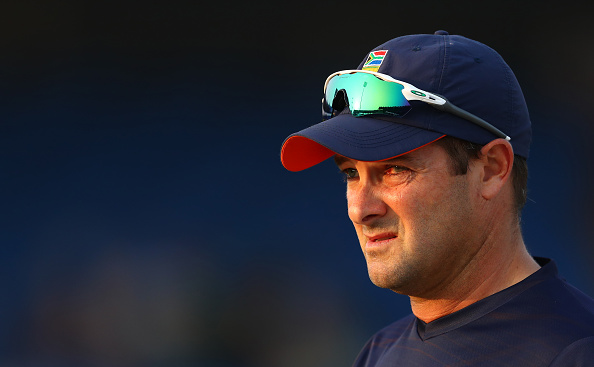 Proteas coach Mark Boucher said losing Aiden Markram was a major blow in the T20 series as the top order struggled to get going.
Image: Matthew Lewis-ICC/ICC via Getty Images

Proteas coach Mark Boucher has pointed out that losing top order T20 batter Aiden Markram for the 2-2 drawn five-match series against India was a major blow for the team.

SA were forced to play without on-form Markram, who is the third ranked batter on the ICC T20 rankings, after he tested positive for Covid-19 upon arrival in India and had to undergo mandatory quarantine.

The Proteas started on a promising note with back-to-back wins in Delhi and Cuttack but allowed India to claw their way back into the series with wins of their own in Vizag and Rajkot.

The fifth and deciding match in Bengaluru was abandoned due to rain on Sunday as the teams shared the honours with Boucher saying the South Africans took a number of lessons from the series.

“There are plenty lessons that we can take, it was tough losing Aiden Markram before we even started the first game,” he said.

Proteas keen to wrap up T20 series against India

Proteas bowler Anrich Nortje says they will treat their fourth T20 match against India on Friday as a final as they aim to wrap up the series with a ...
News
2 weeks ago

“It put us under a bit of pressure because we wanted to play six batters, with Aiden being our sixth bowling option but we couldn’t do that. You come to India on the back of an IPL with a lot of their players in good form having played a lot of cricket in these conditions but I’ll take 2-2.”

Though his side took a share of the spoils, Boucher admitted that they didn’t play their best cricket at times.

“We didn't play our best cricket, it was tough on the IPL players who have stayed throughout the whole tournament and had to come to India on a back-to-back tour.

“Mentally the guys were a little bit tired. They’ll enjoy the break now but there were a lot of lessons, especially in a World Cup year where we can look at and see if we can plug a few gaps going into Australia on different conditions.

“We had periods in the series where we played really well and we can take a lot of learnings from that. It is just the confidence that players can take, it is tough coming from SA to play against India.

“I know a lot of their top players were not here but Indian cricket has a lot of depth at the moment largely due to the IPL. We played a couple of good games and we played two bad games and there are a couple of reasons for that but you can’t read too much into it.”

Boucher also indicated that their plans for preparations for the World Cup in Australia on different conditions will probably change after this series.

“I think our plans will probably change when we go to Australia. That is something that we are aware of but obviously this is what was put on our plate and we had to take whatever we could and try a few options in these conditions and see if they work or not.

“We have asked a few questions on this tour and we got some good answers. Up front our batting, we struggled in a few games to get going and we speak about it after every game to see how we can change our mindset and intent.

“Losing Aiden was a massive loss for us, but in saying that we came up against some quality bowing. I think Bhuvneshwar Kumar was special in this series.

“He put us under pressure throughout the whole series, barring one game where we got a good start. That’s probably where they dominated us with the ball in powerplays.”