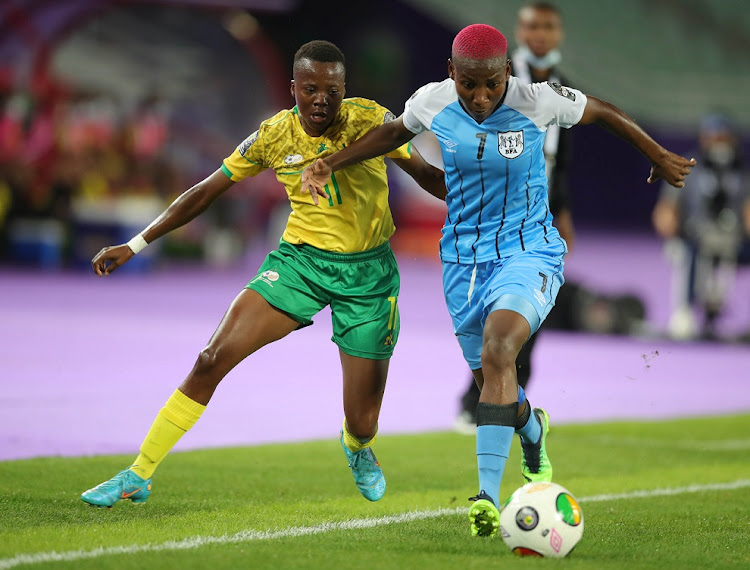 Thembi Kgatlana of SA is challenged by Refilwe Tholakele of Botswana in their 2022 Women's Africa Cup of Nations match at Prince Moulay Abdellah Stadium in Rabat, Morocco on July 10 2022.
Image: Samuel Shivambu/BackpagePix

Banyana Banyana have suffered a huge blow at the 2022 Women's Africa Cup of Nations (Wafcon) as crucial attacking player Thembi Kgatlana has been ruled out for the rest of the tournament.

Kgatlana had to be stretchered off as in-form SA ended top of group C with their third win, 1-0 against Botswana at Stade Prince Moulay El Hassan in Rabat, Morocco, on Sunday night. Kgatlana was replaced by Nthabiseng Majiya in the 69th minute, who then scored the 80th-minute winner.

The loss of speedy winger Kgatlana is a blow to Banyana as they prepare to meet Tunisia, third-placed finishers in group B, in Thursday's quarterfinal at Stade Prince Moulay Al Hassan.

Good news for SA, though, is that another important attacker, Jermaine Seoposenwe, who limped off in the first half against Botswana, was due back in training on Tuesday. It was not clear if she would be ready for the quarterfinal.

Banyana team physician Dr Rodney Mokoka said it would take Kgatlana six months to get back to match fitness.

“Thembi Kgatlana sustained a complete rupture of her left Achilles tendon yesterday [Sunday] in the match against Botswana.

“It was confirmed by MRI scan this morning [Monday]. Unfortunately, she will be out for the whole of the rest of the tournament.

“She is due for an operation back in SA. Post-operation healing will be guided by certain milestones we have to achieve.

“The quicker we achieve those milestones the sooner she’ll be back on the field. She’ll start jogging in roughly three months, return to non-sport in 16 to 20 weeks and return to contact sport in 20 to 24 weeks.”

Mokoka said Seoposenwe “sustained a soft tissue injury of the ankle against Botswana. She is doing well and will be available for training tomorrow [Tuesday]”.

Banyana have been one of the form teams of the Wafcon, beating 11-time champions Nigeria 2-1 in their opening game, then beating Burundi (3-1) and Botswana to top group C.

SA have been five-time runners-up at the continental showpiece and are looking to go one better at Morocco 2022.

Banyana progress to Wafcon quarterfinal with win over Burundi

Banyana Banyana have booked a place in the quarterfinal stage of the 2022 Women’s Africa Cup of Nations (Wafcon) in Morocco with a 3-1 win over ...
Sport
1 month ago