Efficiency of movement and thought, effective execution and discipline should see them through, but nothing in rugby is certain 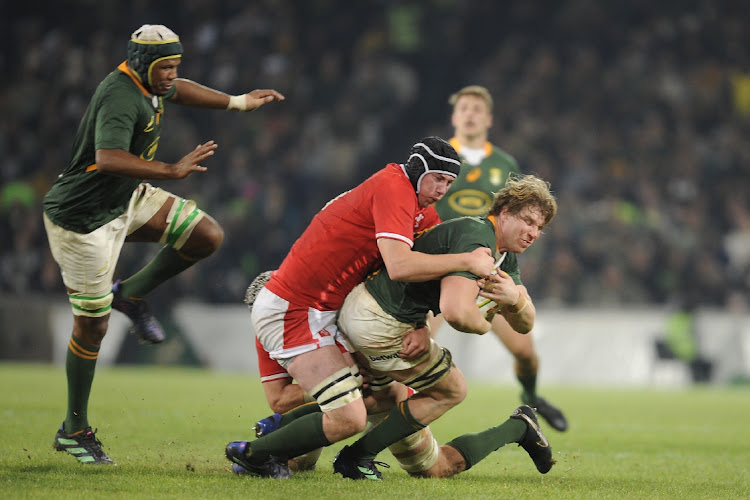 Evan Roos, with the ball, staked a claim for another Test start with his performance in Bloemfontein. Picture: CHARLE LOMBARD/ GALLO IMAGES

As the wind picked up around the Overberg and a faint drizzle flirted with a reluctant sun on Wednesday, a rainbow arced over the hotel where the Springboks have based themselves before the series decider against Wales at the weekend.

Will there be gold to go with the green of SA at the end of that rainbow as they head into a match the Springboks have been at pains to remind us is a “final”? SA have been pretty good at final matches when it counts over about the last year: the British & Irish Lions, the 2019 Rugby World Cup final, the under-20s against Wales on Tuesday night.

“It’s a final, basically,” said Lood de Jager on Wednesday. “It’s one-all, it’s for the series. The series is on the line. I’m sure Wales are treating it the same way. It’s good preparation for us with big games coming this year and next year. It’s good that we get games like these where you are under pressure, where you get that final vibe throughout the week. It’s good preparation if you look at the bigger picture.”

Ah, the bigger picture. The World Cup that dares not speak its name. Bok coach Jacques Nienaber said on Tuesday the World Cup is a long way away, but it is, and will remain for all Test teams, the be-all and end-all of the sport. World Cups are a series of finals. SA’s matches at World Cups against Wales have taken on that sense of final match desperation and nervousness. They are tight, taught rumbles.

If the Springboks looked a little underdone in the first Test at Loftus, they seemed a tad understaffed and, indeed, unlucky in the second in Bloemfontein. As Cape Town nears, the Boks are looking for a streak of rhythm and ruthlessness. Efficiency of movement and thought, effective execution and discipline should see them through. But, nothing in rugby is ever certain.

“It’s hard to control outcomes in terms of what happens. Two tries were very preventable from our side,” said De Jager. “The only thing we can control is the intensity from our side. That’s the big thing. We are going to go out there and bring intensity from the first whistle to the last, and the scoreboard will take care of itself.

“The effort in both Tests was good. We can be a bit more clinical, maybe execute better and have a bigger emphasis on discipline because in a Test match if you give away unnecessary penalties you put yourself under pressure especially with kickers like theirs.”

Damian de Allende rolled out the same lines as De Jager. Small margins. Execution. Discipline. It’s a final. It’s a mantra, but after two matches in which Wales stymied them from controlling through stubbornness and smothering, the Springboks believe they have the game plan to win territory and on the scoreboard.

“We are getting to where we want to on the field. It’s just the fine margins of execution. All the excitement and hunger is still there, but I believe sometimes you can get a bit overeager. If we execute the way we want to on Saturday then we will take a lot of confidence from that.”

Wales, suggested the Springbok centre, did not set out to play in the first Test, but tried to stop the Springboks from playing.

“We had a chance in the first Test, and we lost the line-out, and they scored off it. I don’t know how many tackles the others made, but I made one tackle assist in that game. They were not controlling the game, but they weren’t allowing us to do anything to get into the game. It was a very frustrating game,” said De Allende.

“We handled it well in the first Test. Wales don’t get enough credit. They have a good backline, a lot of caps, a lot of experience. Playing together for a long time. Sometimes in some games you get more frustrated than in others.”

There is, said De Jager, always pressure when you play for the Boks. With the crowd back, he was almost more emotional than before the World Cup final.