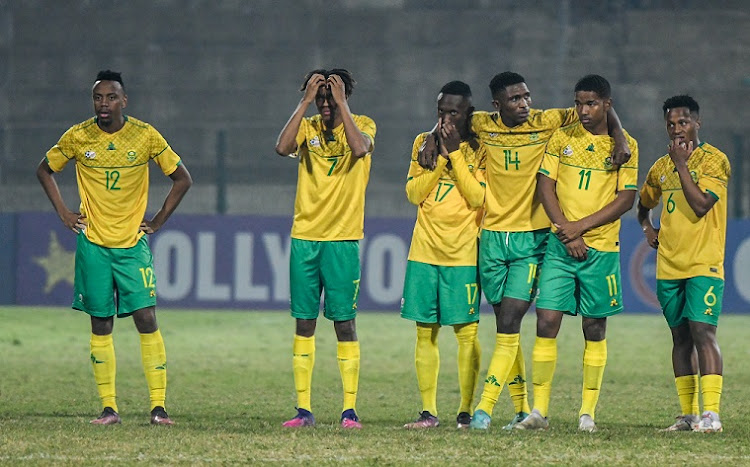 A youthful Bafana Bafana lost on penalties but went down with a fight against a stronger and more experienced Mozambique in their Cosafa Cup quarterfinal clash at a vibrant King Zwelithini Stadium in Durban on Tuesday night.

Bafana held their older neighbours to a goalless draw before losing 5-4 in the penalty shoot-out.

The midfielder is suffering a knee injury, but SA are hoping he will recover in time for the semifinals.
Sport
1 month ago

Stellenbosch FC’s Mcaba was the only player in the starting line-up who had represented the senior national team.

Mkhalele was unable to select midfielder Ethan Brooks as he is out with a minor knee injury.

While the oldest Bafana player in the team was Zuko Mdunyelwa, 23, Mozambique brought their best and most experienced side led by former Cape Town City defender Dove, who captained the Mambas.

However, Mkhalele’s young boys seemed not to be bothered by that as they kept their neighbours under pressure early in the clash.

Bafana looked solid when they were attacking and also strong in defence, and played without fear. The only thing that SA lacked was the final touch as they created chances but couldn’t put them to good use.

Sifama almost broke the deadlock inside the first 15 minutes, but his shot from the Left side inside the box went across the goalmouth.

The first half delivered everything that a football match needs but goals.

Bafana continued to show strength in the second half as they created a fair number of chances. The 18-year-old Thapelo Maseko's long-range shot forced a great save from Mozambique goalkeeper Ernan Siluane on 55 minutes.

Seven minutes later Radiopane ballooned his chance with only the keeper to beat and the young striker was substituted soon after that as Van Wyk of Stellenbosch FC was brought on.

Stand-in Bafana Bafana coach Helman Mkhalele has named the 23-man squad for this year’s Cosafa Cup to take place in Durban from July 5 to 17.
Sport
1 month ago

Without neither sides able to find the back of the net, the match had to be decided through the lottery of penalties.

The Senegalese won the shoot-out 10-9.

Senegal had taken the lead early in the game and they looked like they were going to win without much hassle. They scored in the eighth minute through a Lamine Camara free-kick and some poor goalkeeping by Eswatini’s shot-stopper Mathabela Sandanezwe.

Eswatini equalised on the hour-mark through Philani Mkhontfo and after that neither side could find the back of the net.

Bafana will now play Madagascar in a Plate semifinal while Botswana take on Eswatini in the other clash.