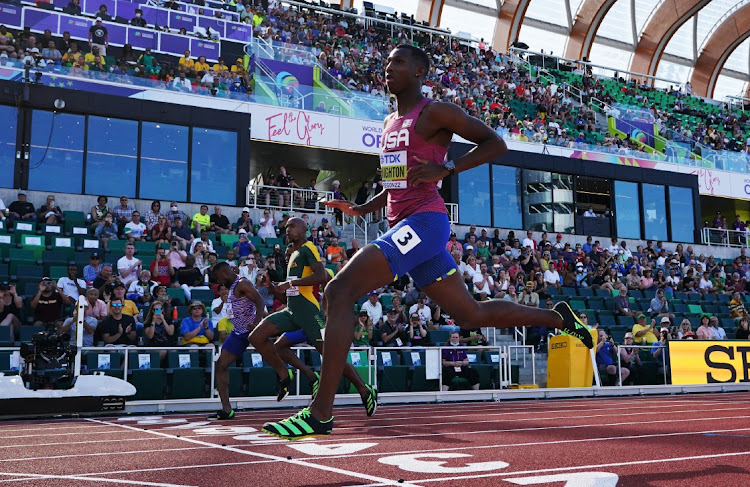 Erriyon Knighton of the US crosses the line to win his heat ahead of second-placed Luxolo Adams.
Image: REUTERS/ LUCY NICHOLSON

Luxolo Adams edged into the 200m final as a fastest loser at the world championships in Eugene, Oregon on Tuesday (Wednesday morning SA time), but he needed to deliver the fourth-best performance of his career to do so.

Adams competed in what proved to be the quickest semifinal heat, ending fourth in 20.09sec with the first three finishers all dipping under 20 seconds.

Noah Lyles of the US won in 19.62 ahead of his compatriot, Kenneth Bednarek, in 19.84 and Jereem Richards of Trinidad and Tobago, the other fastest loser in 19.86.

Adams had to wait out the final third semifinal to see if he would advance, and he survived by one-hundredth of a second. American teenager Erriyon Knighton won in a 19.77 world under-20 record, ahead of Canadian Aaron Brown and Italy’s Filippo Tortu, both on 20.10.

Akani Simbine kept his title of Mr Consistency as he ended fifth in a 100m dominated by the American home boys at the world championships in Eugene, ...
Sport
3 weeks ago

South African champion Sinesipho Dambile ended fifth in the first semifinal in 20.47, one spot ahead of newly crowned 100m champion Fred Kerley, who limped off the track afterwards.

Alexander Ogando won that heat in 19.91 ahead of Joseph Fahnbulleh of Liberia.

Of the eight competitors in Thursday’s final (Friday morning SA time), six are from the Americas and two from Africa.

Adams’s 19.82 is the third-quickest season’s best in the field, but he will probably need to go faster than that to make the podium considering Bednarek, Lyles and Knighton, who finished second, third and fourth at the Tokyo Olympics, have all been faster in their careers.

Olympic champion Andre De Grasse of Canada didn’t line up in the 200m heats on Monday.

Zeney van der Walt advanced to the 400m hurdles semifinals as she finished second in her heat behind Femke Bol of the Netherlands.

She ran hard at the end to overtake Gianna Woodruff of Panama and cross the line in 55.05, matching the second-best time of her career.

Taylon Bieldt was eliminated after losing her rhythm, finishing sixth in her heat in 56.67.

The semifinals are on Wednesday (Thursday morning SA time).