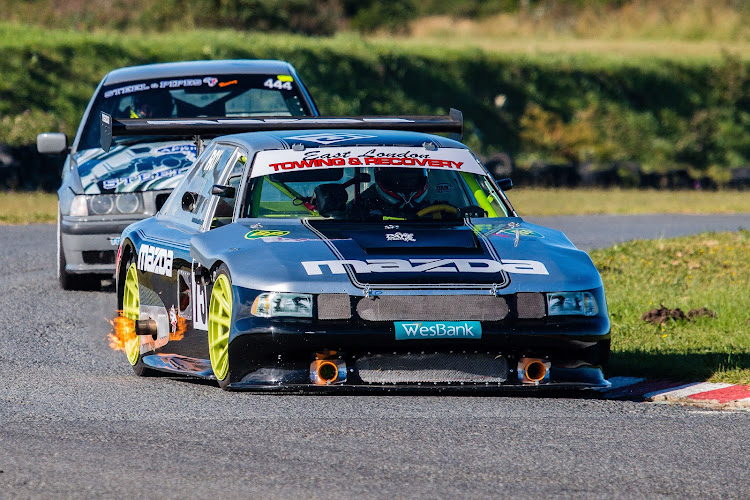 CLOSE COMBAT: Roy Pape in action at the East London Grand Prix Circuit in his Mazda with a BMW in hot pursuit.
Image: DARRYL KUKARD

The local drivers who compete in the Border Modified Saloon Car and Eastern Cape Historic Pre-’80s and Pre-’90s Coastal Challenge Club Championships will be out on track on Saturday for the fourth round of their 2022 season.

Their races will form part of the Winter Motorsport Festival at the Border Motorsport East London Grand Prix Circuit on Friday and Saturday.

Bevan Schwarz is likely to lead the way in the Modified Saloon Car races, but there will be a pack of drivers waiting to pick up the spoils should anything go wrong with his bright yellow V8 Corvette.

Darron Gudmanz (Nissan Skyline R32) and Blake Hurly (Caterham R400) are just two who could be at the front.

Last time out, the Choudree family had a race day to forget, with Brady crashing out in the first race and Bevan’s Polo catching alight in the second heat.

Both cars have been repaired, and they will be looking for a better result this weekend with brother Bryce back at the wheel of the car piloted by Brady in June.

This weekend East London will host one of the biggest Motorsport Festivals.
News
3 weeks ago

The BMW brigade will also be out in force with Gareth Hewitt, RJ Green, Paul Berry and Shaun Vallance ready to do battle.

Zillen Harding and Mornay Swanepoel will also be out in their BMWs.

Roy Pape will be out in his Mazda, as will Mark Els in his MZ5.

JP Fuller will add to the VW Polo numbers, while the Opel Kadettes of Melindre Marais and Craig Borges should also be on the grid.

Cherne Marais will be at the wheel of her Harper.

In the Eastern Cape Historic Pre-’80 and Pre-’90 Coastal Challenge Club races, Mike Forsyth (Backdraft Cobra), who had an untroubled run to victory in all three heats last time out, is likely to face stiff competition from Rudolf de Vos (Chev Can-Am) this weekend.

The Southern African Endurance Series (SAES) is proud to present rounds five, six and seven of the SA GT National Championship as well as rounds ...
Sport
3 weeks ago

Wayne Botha should have things all his own way in Class B, but things are far less certain in the all-Ford Class C, where Johan van der Westhuizen (Interceptor) will try to hold off the Escorts and Cortinas of Gary Schultz, Shane and Carl Fantham, and Quentin and Graham Lessing.

Qualifying for both classes will take place after the SA GT cars have completed their warm-up session with the modifieds expected on track at 10.35am. The historics will follow them.

The first of the day’s three heats will take place just before the lunch break, with the second immediately after the interval.

The third heats for each class are scheduled to take place in the late afternoon after the GT cars complete their one-hour race. — Border Motorsport Club