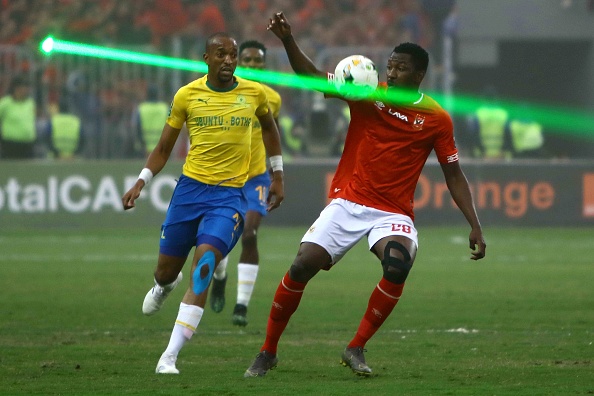 A fan in the stands uses a laser during a Caf Champions League quarterfinal clash between Mamelodi Sundowns and Al Ahly.
Image: AHMED RAMADAN/AFP via Getty Images

The use of lasers by fans is expected to be part of the intimidating atmosphere at the Prince Moulay Abdellah Stadium in Rabat on Saturday where Banyana Banyana take on Morocco in the Africa Women's Cup of Nations (Wafcon) final.

In anticipation of this unsporting behaviour, CAF president Patrice Motsepe has warned that action will be taken against the host nation should their fans resort to using lasers against Banyana players.

Shining of lasers and lighting flares on the stands are common practice in the northern part of the continent to intimidate visiting teams and Banyana are likely to be the victims of it on Saturday (10pm SA time).

“We've got to look at the rules and we have to take action. Even suspending the stadium from hosting CAF games can be done,” said Motsepe during a pre-final media conference on Friday.

Banyana Banyana are a win away from pocketing staggering bonuses but they've collectively insisted they're not thinking about money before Saturday's ...
Sport
2 weeks ago

“We can't allow lasers to be used, particularly when it's directed to the eyes of the opposition player. It's unacceptable, so we've got to look at our rules.

“If you say it happens in England [after a journalist made him aware that lasers were used in one of the games in England last season] ... England have rules that are holding high, high esteem.”

Motsepe added: “If they can't take action, then we have to engage with them to see how we can deal with this going forward. It's something that has no place in football at all.”

The CAF supremo also pointed out that security will be top-notch at the Prince Moulay Abdellah Stadium, having seen some Morocco fans throwing objects on to the field during their semifinal clash against Zambia.

“Security will be tightened, we want everyone to feel safe and be protected.  We can't ruin a great spectacle like this by having security personnel that can be breached,” he said.