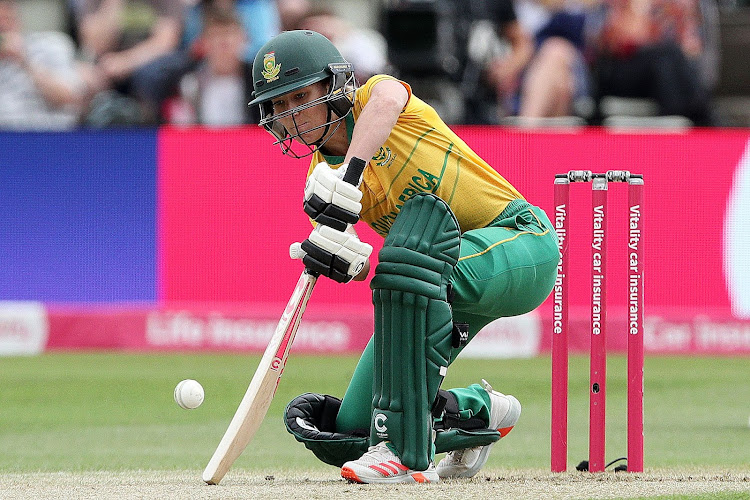 IN THE SWING: SA's Anneke Bosch bats during to the second Vitality T20 against England at New Road in Worcester on Saturday
Image: Ryan Hiscott/Getty Images

A second career half-century for Anneke Bosch was not enough as England claimed an unassailable 2-0 series lead over the Momentum Proteas thanks to a six-wicket victory in the second T20 International (T20I) at the Worcestershire County Cricket Ground on Saturday.

Bosch dispatched eight fours on her way to a 57-ball 61 in an opening century stand with Lara Goodall to help SA set up a competitive total of 148/6 before England’s stand-in skipper Nat Sciver and Danni Wyatt led the response with the bat to reach the target with six balls to spare.

SA lost the toss and were sent in to bat by the home side, with openers Goodall and Bosch getting off to a solid start to set the ideal platform for their side. After a measured approach in the power play, with the visitors on 34/0 after six overs, the duo accelerated towards their 50-run stand for the first wicket.

With the pair now playing with increased confidence at the crease, Bosch brought up her second T20I half-century as her partnership with Goodall surpassed the 100-run mark before England made the breakthrough through Alice Capsey (1/10) to get rid of Goodall for 42 off 34 balls (5 fours).

England thrashed a dismal Proteas by 118 runs during their rain-affected 2nd ODI at Old Trafford in Manchester to level the series 1-1 with one match ...
Sport
3 weeks ago

Bosch soon followed her opening partner back to the dugout after adding a further 18 runs alongside Laura Wolvaardt (21) to leave the Proteas Women on 120/2 within 17 overs.

With wickets in hand and limited overs remaining, SA attempted to put their foot on the pedal but a fall of regular wickets slowed down the scoring rate with Wolvaardt, Chloé Tryon (1), Suné Luus (1) and Mignon du Preez (9) dismissed.

In their chase, England made another flying start through Sophia Dunkley (23) as the top-order batter smashed three fours and one six before skying a Masabata Klaas (1/39) delivery in the third over.

Proteas wicketkeeper/batter Heinrich Klaasen does not believe the fact that SA have not won an ODI series in England in 24 years will weigh heavily ...
Sport
3 weeks ago

With her opening partner having been removed, Wyatt assumed the role of the aggressor alongside Bryony Smith (10) and then Sciver to continue the momentum for the hosts as they reached the 10th over on 80/2 before Wyatt was eventually caught brilliantly by Luus for 39 off 24 balls (6 fours).

Despite the loss of Wyatt, Sciver calmly continued to anchor the chase, having been joined by Amy Jones (20*) at the crease, as the pair put on 56 runs for the fourth wicket to take the English outfit to the brink of victory.

Though SA, through Klaas, picked up a late run out of Sciver for 47 off 41 balls (6 fours), it was proved to be a little too late as England reached their target after 19 overs to seal a six-wicket triumph and a series victory. — Cricket SA