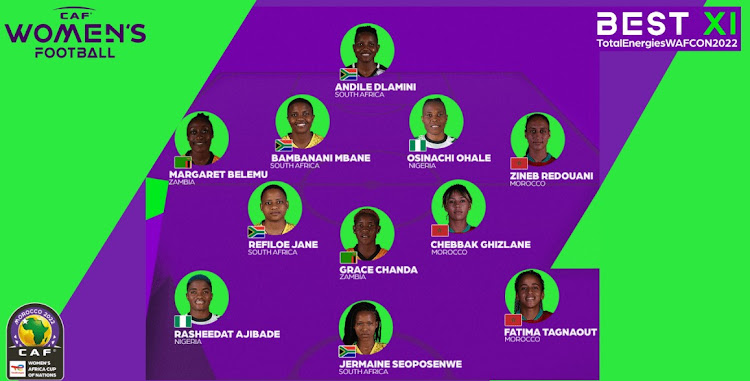 The 2022 Wafcon was staged in Morocco where SA defeated the hosts 2-1 in the final on Saturday night to lift the title for the first time.

Runners up Morocco have the second highest number of players in the Best XI — three, with left-back Zineb Redouani, skipper and midfielder Ghizlane Chebbak and attacking midfielder Fatima Tagnaout.

The Team of the Tournament was selected by the Confederation of African Football’s (Caf) Technical Study Group (TSG).

The TSG went for a 4-3-3 formation, with SA represented in each of the four departments — goalkeeper, defence, midfield and attack.

Banyana’s two-goal hero of the final, Hildah Magaia, did not make the Best XI despite ending Wafcon as joint top scorer with Ajibade and Chebbak on three goals.

Chebbak was named Best Player of the Tournament while Banyana returned home with the Fair Play Award.

After arriving to a heroines’ welcome on Tuesday, Banyana’s victory celebrations continued on Wednesday as they presented the trophy to President Cyril Ramaphosa at the Union Buildings in Pretoria.

The Banyana players have been promised a combined R15m from SA Football Association and department of sport.