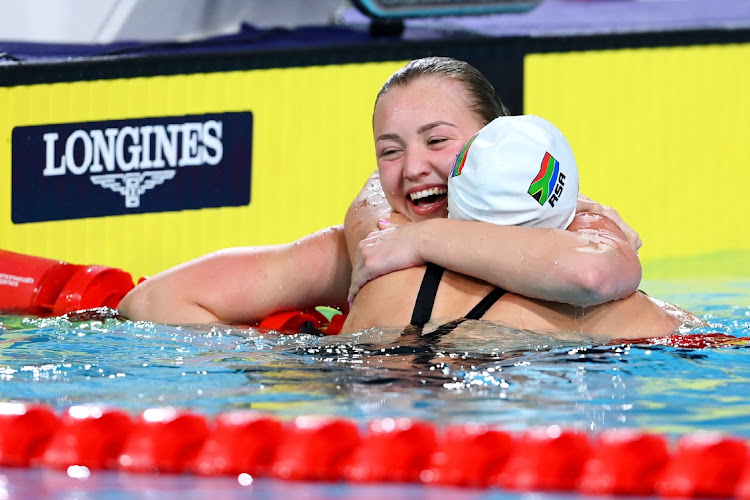 Pretoria schoolkids Lara van Niekerk and Pieter Coetzé are primed to lead Team SA’s medal charge at the Commonwealth Games on Saturday after dominating their swimming heats and semifinals on Friday.

There were no podium finishes for South Africa on the opening day of Birmingham 2022, but these two teenagers offered the nation plenty of hope amid several tough results.

Van Niekerk twice set Games records in the women’s 50m breaststroke, clocking 29.82 sec in the morning and then 29.80 in the evening to take pole position ahead of the final on Saturday.

I’m just so happy I got to break it twice in a day and then we’ll see. Hopefully I can break it again tomorrow night

“I’m just so happy I got to break it twice in a day and then we’ll see. Hopefully I can break it again tomorrow night,” she said.

Teammates Tatjana Schoenmaker and Kaylene Corbett will also line up in the final, giving SA a three-pronged attack.

Schoenmaker, the 100m and 200m defending champion, ended fourth in this event at Gold Coast 2018.

For Corbett, her 31.07 personal best from the morning augurs well for her specialist 200m event later in the gala.

“It’s just amazing having those beautiful girls with me,” added Van Niekerk. “It’s definitely going to calm my nerves knowing that they’re there with me and I’m not all on my own like at worlds [last month].”

For someone who broke 30 seconds for the first time only at the end of last year, she’s being making it a regular occurrence, including while winning bronze in this event at the world championships last month.

Pieter Coetzé scored two impressive victories on the opening day of the final Mare Nostrum gala in Canet on Saturday, winning the 200m and 50m races ...
Sport
2 months ago

The South African was the only one to dip under 54 seconds, but where he really impressed is that after what looked like a poor turn in the evening race, which allowed his rivals to draw level, he powered away from them to get to the wall first.

And he should have more in reserve considering his personal best is 53.62.

Chad le Clos, seeking one medal to draw level with the career haul of 18 Games medals, failed to win a lane in Saturday’s final after finishing fifth in his semifinal in 23.67.

In the first final of the evening Matthew Sates ended seventh in the 400m freestyle, with the Australians scooping all three, newly crowned world champion Elijah Winnington adding the Commonwealth Games gold after clocking 3 min 43.06 sec.

Heroes’ welcome at OR Tambo for victorious Banyana players

Scores of football fans from all over SA joined Safa executive members and government officials at the OR Tambo International Airport in ...
News
2 weeks ago

This isn’t his strongest event, but he wouldn’t have been happy with that performance. He’ll have opportunities to make amends in the 200m freestyle on Saturday as well as the 200m and 400m individual medley races later in the gala.

Elsewhere, Jamie Riddle finished sixth in the men’s triathlon after sitting in the top three well into the final 5km run, while Simone Ackerman ended eighth in the women’s race.

Henri Schoeman, the defending champion, withdrew from the men’s race to focus on the relay, where South Africa are hoping to win a podium spot on Sunday.

The Blitzboks, champions in 2014, won their first two pool matches comfortably, downing Malaysia 46-0 and Tonga 36-5 to secure qualification to the quarterfinals.

Border Ladies centre Asisipho Plaatjies has described being named the captain of the South African Women’s Sevens Rugby squad to compete at the ...
Sport
2 weeks ago

Human and Christie Grobbelaar each went over twice against Tonga, with Jo Pretorius and Sakoyisa Makata, Soyizwapi also crossing the line. But Mfundo Ndhlovu’s tournament could be over after going off injured in the second half.

The Blitzboks will play Scotland in their final group match to determine the pool winner.

Their female rugby sevens counterparts, however, went down 38-0 to Australia and 41-0 to Fiji, Olympic bronze medallists.

Lawn bowls delivered a mixed bag of results with Colleen Piketh, a 2012 world championship bronze medallist, bagging a 21-14 triumph over Nooroa Mataio of the Cook Islands before losing 13-21 to Litia Tikoisuva of Fiji, the 2019 Pacific Games champion.

The SA women’s hockey team were beaten 2-4 by Scotland.