‘I am not udakaboy’: Royal AM CEO Sinky Mnisi blasts owner MaMkhize 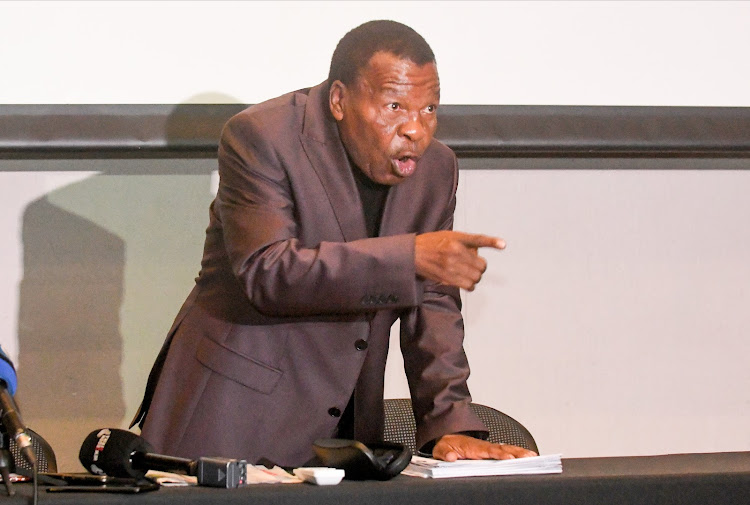 Royal AM CEO Sinky Mnisi addresses a press conference about matters he says have been in the media about him at Premier Hotel OR Tambo on August 3.
Image: Sydney Seshibedi/Gallo Images

Royal AM CEO Sinky Mnisi has blasted the club's owner Shauwn “MaMkhize” Mkhize, saying she failed to protect him from malicious allegations and insisting he is still employed in his post at the KwaZulu-Natal club.

For more than a month stories of Mnisi having been suspended by Mkhize, allegedly for running Royal as his personal fiefdom, have been extensively reported in the media.

Mkhize has refused to confirm reports of Mnisi's suspension.

On Wednesday, in a press conference he called in his capacity as CEO of the club, Mnisi addressed the allegations and said Mkhize “allowed my reputation to be tried, found guilty and hanged by the media”.

This has left Mnisi feeling like he was treated as “udakaboy” (a man who mixes cement at a construction site), a term he appeared to use in reference to Mkhize being in the construction business.

Despite lashing out at his employer Mnisi insisted his relationship with Mkhize remains “cordial”. He insisted he was still receiving a salary from Royal, saying that was proof he is not suspended.

Some of the matters that reports have said led to Mnisi’s alleged suspension include the release of coach John Maduka and hiring of coach Khabo Zondo. Others were the sale of players Given Mashikinya to Maritzburg United and Victor Letsoalo to Sekhukhune United, the release of Ndumiso Mabena and the signing of Marlon Heugh from TS Galaxy. All of these were reported to have been done without the knowledge of Mkhize, though Mnisi denied those allegations.

Mnisi insisted said he has taken no actions at Royal without the knowledge or approval of Mkhize.

“The events of the past month regarding my alleged suspension by Royal AM have taken a toll on my reputation,” Mnisi said.

“I had taken legal advice not to respond to media reports regarding the alleged suspension, charges and dismissal, but to wait for the storm to settle and then comprehensively respond once and for all.

“All these allegations made against me are factually incorrect, without substance and malicious.”

Mnisi said he hoped Mkhize would protect his reputation by clarifying he had not been suspended, but was disappointed when she didn’t do that despite having had various opportunities to.

“I had high expectations that the president of Royal AM shall refute and distance herself from these allegations, particularly because some publication quoted her as the source of the allegations against me.”

“And she appeared at various media platforms where the question about my alleged suspension was directly posed to her and she didn’t categorically deny that I was not placed on suspension.

“I kept quiet for a long time to allow Royal AM and the president of Royal AM to put the record straight regarding the allegations. However, despite knowing that all that was stated in the media about me was incorrect, they did not take an opportunity to put a stop to it.

“I’m hurt, offended, humiliated, and most of all, disappointed considering the sacrifices, the loyalty and the efforts I had to put in for the success of Royal AM, wherein now I am told I was sinking the team.

“I have decided to take special leave to allow the gaping wounds and scars inflicted upon me by the media and public to heal before returning to football life.”

Mnisi also asked the media to respect his name as he has worked hard for it over the years.

“Mina angisiye udakaboy [I am not a cement boy]. You can’t suspend and fire a CEO in the media. People please give me respect.”

Mkhize was reached for a response, but would only say: “It's an internal affair and needs to be dealt with through proper channels at the club, not through the media. I will not comment any further on the matter.”