‘Nomeva’ back in the pursuit of redemption

WBF champ undaunted by long inactivity, ‘sharp as ever’ for Tanzanian 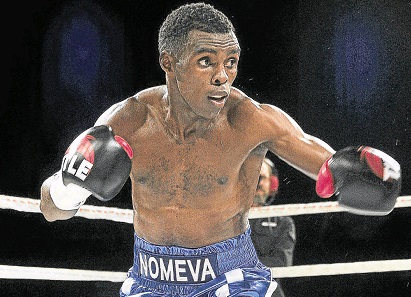 Xolisani ‘Nomeva’ Ndongeni will be out to prove he has not lost any of his sharpness when he returns to the ring.
Image: Veli Nhlapo / File

For now regular action in the ring is of paramount importance to Xolisani “Nomeva” Ndongeni.And that is not hard to understand, given his frequent bouts of long inactivity.

For as long as he can remember, Ndongeni cannot recall fighting twice in a space of three months. But tomorrow he will achieve that elusive feat, when he steps into the ring to defend his newly minted WBF lightweight title against Salumi Jengo of Tanzania.

While he still is in a rebuilding phase after being in limbo, Ndongeni is quick to remind detractors that he is still unbeaten in 24 bouts.

“And I am a two-time world champion at that,” he says.

Indeed, after a good run which saw him winning both SA junior-lightweight and lightweight titles, Ndongeni ascended the IBO throne.

The title seemed to be a gateway to bigger things for him, but then misfortune struck.

While he still is in a rebuilding phase after being in limbo, Ndongeni is quick to remind detractors that he is still unbeaten in 24 bouts.

A R1-million prize is still owing to him, after winning the defunct Premier Boxing League (PBL).

Despite joining up with handlers in Johannesburg fights they failed to come through for him, forcing him to take drastic measures. This included leaving these shores for a brief moment to train at Mayweather gymnasium in the US.

Now since returning home to join Sean Smith, fights are gradually coming through. Tomorrow is his second fight since winning the title in April.“I can say I am happy with my return to activity,” he said. His detractors are talking negative, but Ndongeni is not worried as long as he has an opportunity of stepping into the ring.

“He is young and he is from Tanzania but I am not going to overlook him because of that. At the end of the day, I am a boxer and I will have to do what I do best as a boxer.”

Ndongeni, 28, has never lacked the gift-of-the-gab – often selling and promoting his fights himself.He has not lost that trait it seems, because since the fight was announced he has activated his social media account to market it.

Some pundits do not even know who the promoters are for the fight, but all fans know is that Nomeva will be fighting. “Do not forget the July 21 date in Soweto. Nomeva will entertain you,” are some of his posts.

In actual fact, the fight is promoted by TLB Promotions which helped him return to the ring in April that helped him become a two-time world champion.

Although he has not signed a contract with the new promoters, he is loyal to stick with them every time they need his services.

He comes in to the fight with Jengo when his stablemates at Smith gymnasium are enjoying a good run, with friend Thulani Mbenge having just won the IBO welterweight title in impressive fashion after knocking out Argentinean Diego Chavez last month.

Other boxers from the club who are basking in glory, are Thabiso Mchunu and Jay Jay Sonjica, who are building up the ante for the often fragile, yet loquacious boxer.