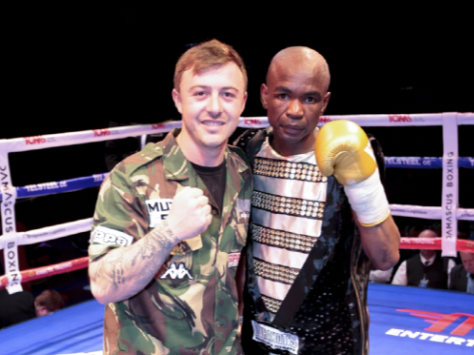 Bulana was knocked out in the first round of his IBO junior lightweight title challenge by Italian Michael Magnesi in Lazio, Italy on Friday night.

Bulana appeared to have miscalculated the referee's count conducted in Italian by only getting up when the fight was already being waved over.

His loss sparked heated debate at the hotel in Gqeberha where Rumble Africa Promotions is set to promote a blockbuster show headlined by the IBF junior-flyweight title eliminator between Sive Nontshinga and Filipino Christian Araneta on Saturday evening.

With all boxing stakeholders including officials, boxers and trainers dining at the hotel hall, food was hardly touched as the debate intensified on whether Bulana lost fairly.

Bulana who went into the fight sporting an unbeaten record in 12 bouts, was challenging Magnesi's IBO junior lightweight title.
Sport
3 weeks ago

Trainer Damien Durandt, who is in the city to guide his boxer Jackson Chauke in his SA flyweight title defence against Luyanda Ntwanambi, was most vocal, arguing that Bulana should have understood that he was fighting in a foreign country.

“He should not have waited until the referee reached a count of eight before getting up,” he said

Durandt is familiar with fighting abroad having taken his boxers including Chauke to victories in a country like Russia among others.

He also trains WBC cruiserweight champion Ilunga Makabu who he guided to several victories in Russia before beating Michal Cieslak of Poland to win the WBC crown in his home country in DR Congo.

Demonstrating how Bulana should have reacted after being dropped, Durandt said the body language of the East London boxer reflected defeat hence the referee stopped the fight.

However, world-acclaimed referee Deon Dwarte who will be the third man in the ring in the Nontshinga-Araneta bout disagreed.

Time for Nontshinga to shine in world title eliminator

Sive Nontshinga will get an opportunity to consolidate his status as one of the new generation of fighters when he clashes against Filipino ...
Sport
3 weeks ago

Dwarte, who is considered the best referee in the land having recently officiated in the world heavyweight title fight between Anthony Joshua and Kubrat Pulev in England, said the referee in the Bulana fight got it all wrong.

“The referee did not give Bulana a chance and never conveyed to him that he was about to stop the fight,” he argued.

But Benny Pailman, who will usher Lerato Dlamini to war against Zimbabwean Hassan Milanzi in an IBF regional featherweight title clash objected, said Bulana was equally to blame.

The heated debate swung to and fro.

Among the other people who were very active in the debate were Sean Smith, who will guide Duncan Village boxer Ayabonga Sonjica in his IBF regional title clash against Theophilus Tetteh of Ghana, Devon Currer who will be the ring announcer at the tournament as well as Old Buck sponsorship representative Luyanda Kana, who is the matchmaker of the tournament.