The event previously unearthed talent that went on to Olympic level 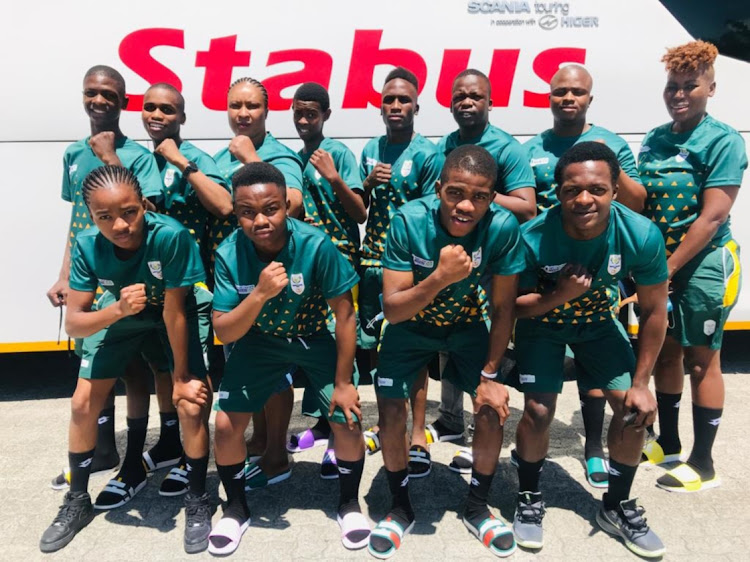 SA REPRESENTATIVES SA Boxing Team to compete at the Zone Five Games in Lesotho together with their coaches and manager Noluvuyo Joxo, third from right is brimming with confidence to bring medals.
Image: supplied

A strong SA Team left for the Region Five Games in Lesotho on Wednesday, brimming with confidence despite glitches in its preparations.

The team, consisting of 240 athletes who will compete in 11 sporting codes, left by bus for the games to be contested at youth level in Maseru from Friday to December 12.

SA Sports Confederation and Olympic Committee (Sascoc) president Gary Hendricks wished the team good luck and expressed confidence that it would emulate athletes whose talent was previously unearthed by the games.

The games are a breeding ground for talent having produced the likes of Wayde van Niekerk, Caster Semenya and Chad le Clos, who all went on to win Olympic gold medals.

The games were scheduled to be hosted in 2020 but were postponed for a year due to the Covid-19 pandemic.

“It is exciting and heart warming to see so many young talent selected to represent Team SA at these games,” Hendricks said.

“These are the stars of tomorrow and we are proud of all the hard work they put in along with everyone who supported them in their sporting journeys.”

As usual, the Eastern Cape dominates the boxing outfit with five of the eight fighters part of the team.

The biggest medal hopefuls in the SA boxing team are Mdantsane duo Siseko Teyise and Tiisetso Matikinca, who won gold medals at the national championships in Cape Town in October

This follows the Dispatch's report that Teyise, NU 12 Mdantsane, had been left out of the team to compete at the Zone V Games in Lesotho in December ...
Sport
2 months ago

After the saga over the absence of travel documents which initially saw boxers who won silver medals at the national championships in Cape Town last month being drafted to the team, the management team breathed a sigh of relief when leeway was allowed for those who received their papers late to be included in the team.

“At least now we are confident that we have the best team going to these games,” boxing team manager Noluvuyo Joxo said.

While almost all the gold medallists from Cape Town managed to make it to the team, only one boxer Dexter Mfundo Dhludhlu, of Limpopo, was dropped when he could not obtain his documents on time.

Joxo, who will be managing the team for the first time, sounded nervous but emphasised that her experience in managing her boxing club, Siyaqhuba in Santa, East London had served her well.

“I was really nervous but through the support I got from Sanabo I managed to get things right,” she said.

“The biggest challenge was the absence of travel documents for the majority of boxers which left us with a depleted team.

“But when another opportunity was opened we managed to get the best boxers for the team.”

The biggest challenge for the team was its inability to camp before the games due to what Sanabo secretary Liwa Mlokoti attributed to the boxers writing end of year exams.

“The boxers only gathered in Johannesburg a day before their departure so we are a bit worried about their lack of adequate preparation.”

The event will see amateur boxers from four provinces vying for supremacy in the Sabof's biggest championships to be held in the province.
Sport
3 months ago

The team is the first selected after the new Sanabo executive came to office after its elections in June.

“Everyone in the team is new but we hope that teams from other countries are new as well so in that regard I can say the ground is even.

“What is important is for them to go there and perform at their best and gain experience in the process.

“We cannot put them under pressure by expecting them to return home with numerous medals.”