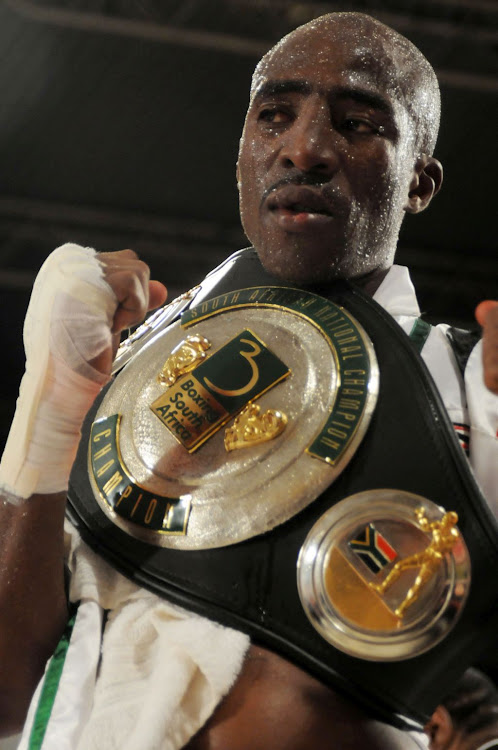 Sabelo Jubatha ended the reign of Thando Vukuza as the national junior featherweight champion with a 10-round stoppage on December 18, 2009.
Image: Gallo Images

It has been 12 years since Sabelo “Homicide” Jubatha won the South African junior featherweight boxing.

His career was guided by promoter S'Phatho Handi, while successful veteran-trained Boy Boy Mpulampula honed his skills at Enothole Gym. The tough-as-nails prize fighter, whose facial looks resemble that of the late American rapper and actor Tupac Amaru Shakur, was actually spotted by Luyanda Kana, a political prisoner serving life at the same prison. Kana opened a boxing academy at the prison.

Once out, Jubatha made his debut on April 6, stopping Ali Tinise in the first round of their four rounder, which was one of the many four rounders that formed part of Baby Champs' fights at Mdantsane Indoor Centre.

How Gingqi won title after bout was scored a draw

The Mdantsane boxer was crowned the national champion via a split decision after being docked points twice during the fight.
Sport
10 months ago

Two months later Jubatha chalked up another first-round stoppage over Siyanda Jalibokwe at the same venue before outpointing Tello Dithebe in the semifinals of the four-rounds development programme. He was stopped in two round by hard-hitting Matima “Hurricane” Molefe in the finals.

But Jubatha soldiered on and chalked up two wins before ending the reign of Thando Vukuza as the national junior featherweight champion with a 10-round stoppage on December 18, 2009.

After two defences, Jubatha, was supposed to meet Simphiwe Tom in the ring in March, but twisted his ankle. Apparently Boxing South Africa  “unfairly” deposed the champion because it disproved the validity of his medical certificate.

Jubatha’s camp and BSA were engaged in a bout of protracted mudslinging, but because the fighter was not available to defend his title against Tom, it was declared vacant.

Molefe and Tom fought for the vacant title. Molefe stopped Tom in the second round on May 29, 2011. But Matima's punch seemed to have been sponsored because he allegedly failed a dope test and the boxer who was trained by successful mentor Nick “Mthakathi” Durandt was stripped. Molefe was tested for dope soon after his fight and he tested positive of anabolic steroids. Molefe said Durandt administered an injection on him. Durandt appeared before a BSA disciplinary hearing but nothing came out of that process and Molefe was banned for two years.

Ilitha-born and Johannesburg-based temperamental boxer Mfusi Maxhayi denied his no-show for his bout against Khanyile Bulana last weekend was ...
Sport
7 months ago

Jubatha came back more determined and, against seemingly insurmountable odds, he astounded the fighting fraternity by regaining the crown. Jubatha stopped Tom in the fourth round on December 9, 2011. Then 32 years old, the champion defended successfully on March 30 2012 against Wonga Ntoyakhe  before being dethroned by Sidney “Skeleton” Maluleka over seven rounds on September 30 2012.

That was Jubatha's second defeat. He bounced back to chalk up a win against Mbuyiseli Bester in what was his seventh knockout against two losses. Jubatha went off the rails and he first allegedly assaulted his wife and was arrested and locked up at Mdantsane Prison, where he was accused of assaulting a police officer. He was later released but that was the end of his boxing career.