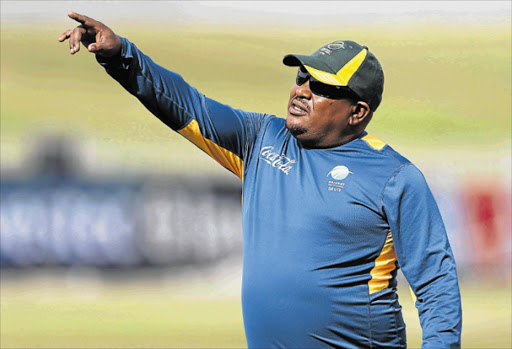 Hudson Park High School students Mnyaka and Niemand will be turning out for the South African team in their upcoming series against England and Namibia which gets under way at the end of this month.

“Akhona and Jason are in the squad so I decided to pop in for a quick catch up on how their preparation is going,” said Mahatlane.

“England is two weeks away, so I am just making sure that there are no injury concerns and everyone is on top of their game.”

Niemand and Mnyaka are two of the Border’s most promising emerging talents and proved their impressive potential by breaking into the Border senior team earlier this year.

Mnyaka has featured in two T20 games and a single one-day match, while Niemand played a starring role in Border’s most recent match, a record chase against Western Province at Buffalo Park.

“I think it is very positive that these guys are breaking into the senior set-up and being exposed to list A cricket,” said Mahatlane.

“You watch how Jason batted against Western Province in chasing 350 and getting that 80-odd; his confidence levels are now very high and hopefully he can carry that experience into the U19 setup.”

Earlier this year Mnyaka also became the only schoolboy to be selected for the now postponed Global T20 Destination League, which came as a surprise to many, in so doing he proved he is great future prospect.

“It just shows the confidence that a lot of people that have watched him play have in him,” said Mahatlane.

“I know that Robbie Peterson was the guy that really pushed for him and worked with him early on this year when he was consulting for us (the U19s), so again it just shows the kind of potential he has.”

Mnyaka and Niemand turned out for the SA U19 team at the start of the year in the tri-series against Sri Lanka and Zimbabwe, and they will be eager to make an immediate impact with the team in the coming series.

“I think what I want to see from this series is for the guys to basically get out there and make sure they understand their roles and really nail down the way that we are going to play for the next two months or so.

“That is the main goal,” said Mahatlane.

The final squad to compete in the U19 World Cup in New Zealand to be played in January will be named next month.

“The team has to be announced on the 11th of December and we head off for New Zealand in the first week of January,” said Mahatlane.

“I think these guys will form the majority of the squad.

“There are obviously a few other players who we are tracking and monitoring and we know exactly where they are.

“So there are some others that could come in, but the core and nucleus of the squad will come from this group of players.”

The five-match Youth One-Day International (ODI) Triangular series against England and Namibia will be played from November 30 to December 10 in Potchefstroom.