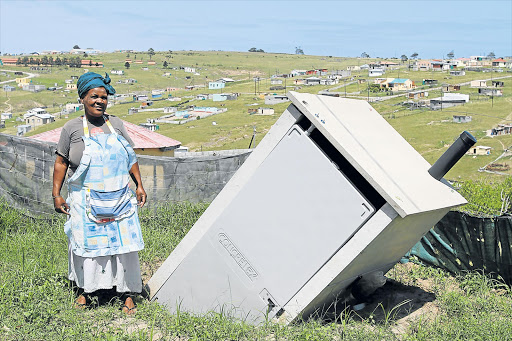 TOILET SAGA: An unidentified woman next to a toilet at her home in Kwelera. She said she did not use it and it collapsed a week after being installed Picture: SINO MAJANGAZA
The right of the public to a free media is indisputable. It is an essential component of South Africa’s democracy – which depends on informed citizens participating in all aspects of our society.

There are many aspects to this, and for the media to play its role it needs to be trusted and seen as credible by the public.

Independent regulation is crucial to this – intended to act in the public interest and provide a means for redress if any publication breaches the fundamental responsibility of journalism – which is to tell the truth.

It is now three years since the press committed to addressing flaws identified in the system of self-regulation in response to the findings of the Press Freedom Commission (PFC) headed by the late former Chief Justice Pius Langa.

If the new system worked though, we should be seeing its effects on the pages of newspapers, with a higher commitment and more effort put into reporting the truth rather than distorting this for a “sensational” headline.

The problem is not that the self-regulatory system does not find the media at fault. It does. And papers are regularly ordered to say sorry for their “blunders”. But will a system that does not affect the bottom line of publishers or the performance bonuses of editors and journalists ever really ensure that ethics are adhered to?

The danger of not doing this is that the media will increasingly be viewed with scepticism. And the falling circulation of print publications might be due, in part, to a lack of credibility and relevance to readers.

On April 20, the Press Ombudsman and a panel of adjudicators ruled that despite the efforts and good intentions to investigate corruption, the Daily Dispatch (owned by the Tiso Blackstar Group) had failed to verify a link between the awarding of a “toilets tender” and the influence of the ANC leaders mentioned in that story and depicted in photographs.

This publication was found to be in breach of the following sections of the Press Code:

l 2.1:“The press shall take care to report news truthfully, accurately and fairly”;

l4.7: “The press shall exercise care and consideration in matters involving dignity and reputation…”

In its response, the Dispatch argued that it got comment from “Mpeluza”  and tried to get hold of “Sambudla”. The Press Ombudsman concluded that the Dispatch had failed to return to ANC secretary general Gwede Mantashe, who was the subject of the story, to answer concerns about his alleged influence over the tender, which was the nub of the story.

Again, this was  in breach of Section2.5 of the Press Code that states: “A publication shall seek the views of the subject of critical reportage in advance of publication…”

Worst of all, the headline according to the ombudsman,  was based on information that could not be proven.

The ombudsman found this was unfair and in breach of Section2.1 of the code.

Whilst the Press Ombudsman acknowledged the seriousness of the breach by the Dispatch and the unnecessary harm this story did to President Jacob Zuma,  Mantashe and communication head (DIP) Lindiwe Zulu’s dignity and reputation, the sanction was that the Dispatch must  say sorry.

And, as in the Kasrils vs Sunday Times ruling, the requirement is that the apology should feature prominently on the front page, immediately under the masthead, and should include the words “apology” or “apologises”, and “ANC”, with a reference to the proper apology inside. Further, the sanction is for the apology to be on either page 2 or 3, and for it to encompass a proper summary of the panel’s finding.

On another matter of Lumko Mtimde vs Business Day on April 2, the Press Ombudsman noted Section2.6 of the Press Code: “A publication shall make amends for publishing information or comment that is found to be inaccurate by printing, promptly and with appropriate prominence, a retraction, correction or explanation.”

The ombudsman emphasised that Section2.6 does not require that an apology have exactly the same prominence as the report in question, it merely states that it should be “appropriately” prominent.

He noted the seriousness of the breach of the code by both Business Day and City Press (in a similar complaint, Lumko Mtimde vs City Press) and said he had little doubt that the errors have caused Mtimde some serious, unnecessary harm. But the ombudsman simply noted that the apologies were printed promptly.

Section 8.2 of the complaints procedures states: “Monetary fines will not be imposed as a penalty for the content of the press.” Accordingly, the Press Ombudsman noted he did not have the jurisdiction to impose monetary fines for breaches of the code.

These are but  a few examples of how the print media, in its rush to print and be first to break a story, breaches the Press Code, harms a number of innocent citizens and damages their integrity and reputation, with very little consequences.

On the scan of the Press Council website, www.presscouncil.co.za, are a number of such apologies, including the one of March13 (2015) for the case of Prince Buthelezi vs City Press.

These are in addition to voluntary daily apologies in a small corner boxes found in newspapers countrywide.

Similarly, on Google you will find a number of SA media apologies such as the one from News24 to Mtimde, for example. But the danger when you google somebody is that the most read articles appear first, so if the apology does not appear on the first page of the Google results, wrong perceptions are unduly created about people. Readers generally read the initial article and subsequent reports on the same matter may not get the same readership as the initial damaging article.

In March 2012 the late former Chief Justice Pius Langa and a nine person team appointed by Print Media SA and the SA National Editors Forum submitted the PFC Report which supported the need for independent regulation, thereby recommending independent co-regulation as a compromise, a number of governance changes, waiving of the illegal waiver of the complainants’ right to pursue a legal route on lodging a complaint with the Press Ombudsman, media transformation, content diversification, skills development, a media charter, a number of amendments to the Press Code – including “revise the regime of sanctions based on a hierarchy of infractions and their corresponding sanctions, with a scale of ‘space fines’ and ‘monetary fines’’’.

This PFC report attempted to bring public interest into the regime of self regulation. It also recommended ways of discouraging the practice of unethical and gutter journalism which compromises the journalistic profession. The question is, to what extent were its recommendations taken seriously.

The ANC, at its 52nd and 53rd conferences (Polokwane and Mangaung), decided that an inquiry/public hearings should be held by parliament’s portfolio committee on communications, reflecting on the PFC Report and that the desirability of establishing an independent appeals mechanism be investigated as one way of promoting media accountability, having regard to the Constitutional Act of 1996.

The fourth parliament could not conduct this inquiry. It is hoped the fifth parliament will manage to process this important public interest matter.

The issue, as I understand it, was not about the wording, such as whether it was called a media appeals tribunal (MAT) as some people reacted to the word tribunal. Nor was the issue ever about state control or state regulation, or pre-publication censorship. To the contrary, it has always been about independent media regulation, the acknowledgement of other rights such as the right to dignity and the right to privacy,  and also compliance with the Constitution Act, the law and the Press Code.

A statutorily created system also does not mean state control. In South Africa there are a number of independent bodies created by statutes, such as the IEC, the Public Protector, ICASA and the IBA.

As part of the above-mentioned parliamentary process and noting the recommendations of the PFC, regard has to be given as to how to  discourage compromising the integrity of journalism as a profession? How do we discourage breaching and noncompliance of the Constitution Act, other laws and the Press Code? How do we strengthen self regulation and how do we ensure that human dignity and rights of those affected are protected by the regulatory system? Further, how do we ensure appeals can be made through an independent regulatory body – do we impose fines guided by the different tiers in the Press Council complaints procedures and if so, how much? Do we fire editors and sub-editors who preside over breaches of the Press Code? And generally, what needs to be done to protect media freedom FOR ALL, as well as transformation and the promotion of media diversity.

Of further consideration is whether South Africa should amend the defamation laws for effective regulation and in the public interest. The defamatory route could be a quick fix that could impose effective remedies, including fines. But what else can be done to strengthen the independent regulation of the print media, of course within the framework of the Constitution Act of 1996 (as amended)?

As the citizenry and members of the media industry, we need to have a dispassionate dialogue and a conversation on these matters, in the public interest, and prescribe a system that promotes trust in the media – and therefore reinforces and  protects freedom of expression, media freedom, whilst at the same time respecting all other rights enshrined in our constitution.

Our media must be free, independent, diverse, vibrant and investigative. It must report wrongs and corruption. But all of this must be done within the four corners of the law.

The Dispatch has appealed the ombudsman’s ruling