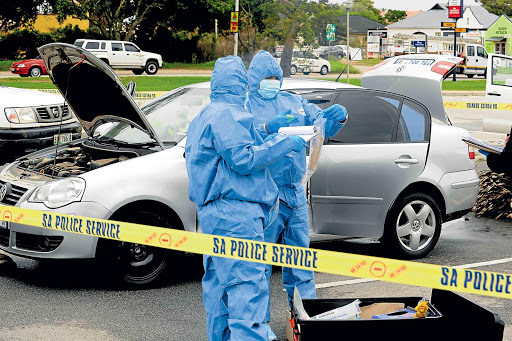 CRUCIAL: Experts examine a car used in a crime in PE Picture: MIKE HOLMES
True crime investigators don’t sneeze, eat, stomp around and use the loo when collecting evidence at a crime scene.

Evidence was compromised when many people at a crime scene left traces of their DNA behind that could complicate an investigation.

“DNA evidence is so small, it can be contaminated easily.”

Ah Kun said the free DNA Project workshops underlined the importance of proper DNA collection by providing information on what could be done to properly secure a crime scene.

“The first responders play an important role to secure and protect a crime scene.”

He said the interaction between the victim, criminal and crime scene created a triangle of evidence that could easily be compromised by outside interference.

First responders were told that simple things like sneezing at a crime scene, smoking, eating and not wearing gloves could introduce evidence into an investigation that should never be there.

According to Ah Kun, DNA could be extracted from saliva, blood, skin cells, semen, hair roots, teeth and bones.

“70% of DNA evidence can be collected from the body of a victim, but it needs to be done within 72 hours.”

He urged first responders to wear protective clothing, including double gloves, at a crime scene and for all to use the same single path to enter and leave the scene.

They were also told not to use toilets or other ablutions as they could wash away vital DNA evidence.

The DNA Project was instrumental in getting the newly introduced DNA Act onto the statute books earlier this year and is helping to compile a national database of information in efforts to prevent and solve crimes.

The new legislation makes it mandatory for the DNA of 23 categories of schedule eight offenders, like rapists, murderers and kidnappers to be stored on the database.

Police must be taught how to take mouth swabs from suspects instead of waiting for doctors to do it. To date, 4576 police have been trained to do the swabs.

The workshop was organised by Nemato Change a Life founder, Jan Blom, to build better relations between police and residents in an effort to prevent and solve crime. — davidm@dispatch.co.za