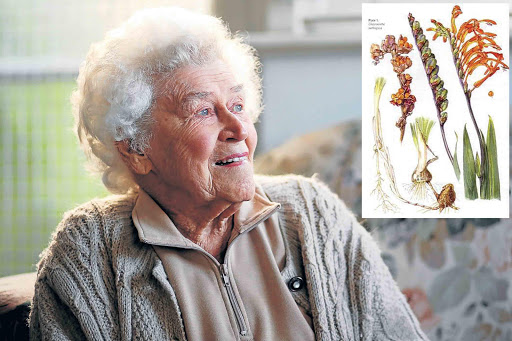 Batten, who painted more than 1000 watercolour plates which illustrated several books, including her best-known Flowers of Southern Africa and Wildflowers of the Eastern Cape, died of a heart attack at St Dominic’s Hospital.

She was surrounded by her sons Tom and Christopher Batten and oldest grandson, Nicholas Batten. The artist lived in her Union Street home since 1946.

There she created detailed watercolours of roots, seeds, buds and blooms of the specimens she recorded – including the plant’s environmental background in pencil drawings.

“She had many talents and started the pottery school in the East London Technical College in 1951,” said Tom.

“She was one of the top three or four botanical artists in the world, but she could turn her hand to anything and even built me a canoe when I was 12.”

Batten, who was born Auriol Ursula Luyt Taylor in Pietermaritzburg in 1918, had a botany degree from the University of Natal and studied art at the Durban Technical College.

Among many accolades, she received a gold medal from the Royal Horticultural Society for her illustrations in Flowers of Southern Africa in 1986 and was honoured by Rhodes University with a science doctorate in 1994 – alongside Govan Mbeki and Guy Butler. In an interview a few years ago, Batten said she had embarked on her botanical career in the 1960s when she and her aunt Hertha Bokelmann decided to paint all the flowers of the Eastern Cape.

“There was nothing on the flowers of this province and we had to do something about it,” she said, describing how she would trudge into the “bundu” between Port Elizabeth and Kokstad collecting specimens.

Years later, after completing Flowers of Southern Africa, the 100 original watercolour plates she produced for her book were donated to the nation and are kept in the National Botanical Institute in Pretoria.

She married Ashley Batten in 1941 and the couple had three children – Tom, Diana, who died four years ago, and Christopher.

Her last book Freesia was published in 2011 and illustrated in collaboration with Kirstenbosch botanist John Manning.

A memorial service for Batten will be held at 10am on Friday at St Alban’s church in Vincent where a ceramic figure of Christ that she created is still displayed. — barbarah@dispatch.co.za