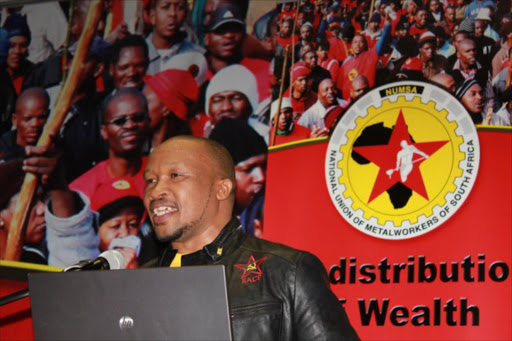 Numsa has condemned the murder of Wild Coast anti-mining activist
The National Union of Metalworkers of South Africa in partnership with civil society and other unions will stage a national strike against corruption at the end of the month.

During the strike‚ two major marches will take place on September 30 and will be led by Numsa‚  the Federation of Unions of SA (Fedusa)‚ National Union Council of Trade Unions (Nactu) and other independent unions.

One march will be to the Union Buildings in Pretoria while the other will be at Parliament in Cape Town.

After two meetings last month with the National Economic Development and Labour Council (Nedlac)‚ Numsa issued a 14-day notice to strike on a socio-economic issue – a protest action against corruption.

Numsa president Andrew Chirwa told reporters in Newtown‚ downtown Johannesburg‚ today that labour unions would join civil society in the Unite Against Corruption coalition to draw the attention of the nation to the problems created by corruption in the country.

“By joining the coalition‚ we are asserting that corruption does not only take place in the public sector. Our employers and the business sectors are directly involved in acts of corruption‚” said Chirwa.

He said corruption robbed the South African economy of jobs and took away resources from the provision of basic services “meant for the working class”.