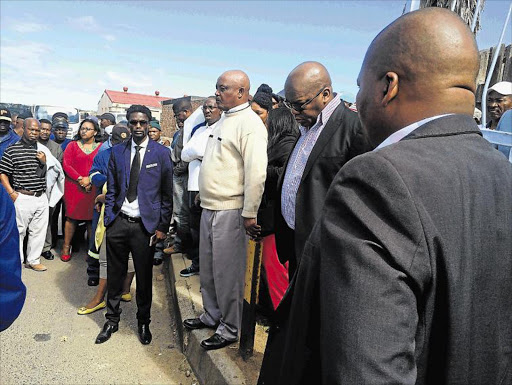 At the time of the incident, a group of more than 100 municipal workers had staged a sit-in over an electronic clocking-in system, demanding a return to the old method of clocking-in by signing a register.

Workers arrived early at work on Friday and locked management out of the depot.

Bucholz was reporting for duty when he came across protesting employees standing inside the premises next to the locked gate.

He approached security guards for keys to the gate but was told the employees had the keys.

Eyewitnesses said Bucholz then got into his Ford Ranger bakkie, reversed for about 100m and sped towards the gate. He crashed it open and on impact the gate hit Mbidlana. The father of four was taken to Frere Hospital where he later died from his injuries.

Pakati visited the site of the crash yesterday and spent the morning listening to workers reciting events leading up to the incident.

Speaking to the Dispatch later, Pakati said: “It was brought to my attention that on Friday an incident happened here where a worker died as a result of a negligent act by a person who is also employed here.

“This in my view is perceived as an act of racism because there was no reason for the employee to do what he did. The clocking issue has not be resolved, there is still a dispute between workers and management regarding the clocking system that was introduced and according to workers there was not sufficient consultation in the process.

“Now we will suggest a process of engagement between our HR department and the workers be undertaken so these matters are resolved.

“It is unfortunate that it had to come to this point where a worker had to die,” Pakati said.

Police spokesman Captain Mluleki Mbi said a murder case was being investigated and no arrests had been made.

The Dispatch was yesterday informed that Bucholz, who after the incident collapsed at the Cambridge Police Station where he had gone to report the matter, was receiving treatment at a private health care facility. No further details about his condition were available at the time of writing.

Mzimkhulu Morgan, a member of the BCM workers’ task team who chaired the meeting between Pakati and workers, said workers signed contracts of employment with BCM and not death warrants.

“This is bad. The incident reflects bad on the part of the employer. If this issue could have been resolved we wouldn’t be here,” Morgan said. — zwangam@dispatch.co.za