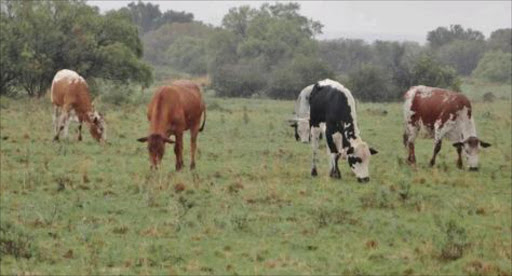 cattle grazing on a farm in the Eastern Cape. Picture sourced
Rampant stock theft in villages around King William’s Town is costing subsistence farmers thousands of rands in revenue.

Since the start of this year, villagers said they had experienced incidents of stock theft weekly and criticised police for not doing enough.

Many villagers attribute the theft to the work of syndicates who collude with residents.

Last week Tuesday, Quzini villager, Wilson Siyata lost six cattle. “All of them are gone. We searched through the village and were shocked to find cattle intestines dumped in Mdingi river,” said Siyata.

Siyata said they had reported the incident to the police. His wife, Florence took the Dispatch team to a yard where they suspect that some of the cattle may have been slaughtered. “We suspect that they were slaughtered and taken out of the village. We hope that police can speed up their investigation and arrest these suspects,” she said.

Siyata said 14 cattle had been stolen in the past week in two villages. “This rampant stock theft is getting out of hand. Many village people like us depend on these cattle for survival as we sometime sell them to make money,” he said.

Another villager, Piere Jali, who lost one cow said he would not rest until those responsible were found. “We are going to investigate and make sure those who have done this are dealt with.”

She said police arrested a 42-year-old Dimbaza woman after meat was found in her house. “Police found the meat and arrested the woman. She is charged with possession of suspected stolen stock. This case is not linked with the Quzini case but investigations continue,” said Mawisa.

The woman is due to appear in Dimbaza Magistrate’s Court today.