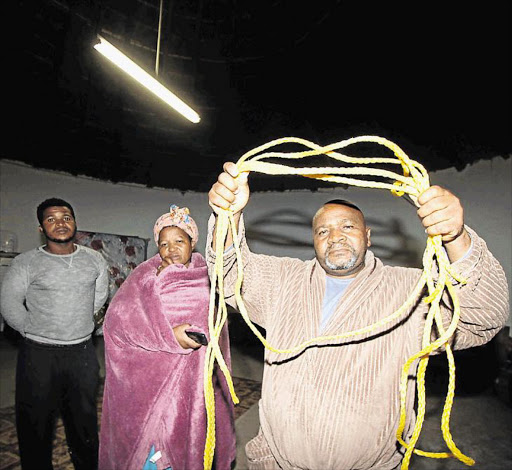 GRIEVING FAMILY: Mzuyanda Dlanaye and Minentle’s parents Sipho Dlanaye and Noluthando Dlanaye with the rope the boy hanged himself with Picture: LULAMILE FENI
Instead of celebrating his grandson’s passage to manhood, a grieving archbishop now has to bury him.

Minentle was found hanging by a rope at his grandfather’s house in Mchoncho village in Ngqeleni last Wednesday after a 10-month battle with a circumcision complication that saw him having a penile amputation.

The teenager had lived with his grandparents because his parents work in Johannesburg.

Dlanaye, who is also a police lieutenant, and his wife Noluthando Dlanaye spent months trying to counsel the stricken teen.

At an initiation school in May last year Minentle was ill-treated, assaulted with sticks and burnt on his buttocks.

He was treated in hospitals in Mthatha and Libode for complications following the circumcision.

“He could not take it any more. It was too heavy for him to deal with it and he could not see a future as a man after he had a penile amputation following the illegal circumcision that went horribly wrong,” said Dlanaye.

The archbishop has lashed out at Ngqeleni police, saying they failed him and Minentle.

“We heard that some juveniles were arrested, but released to the parents. We do not even know what the charges were and what the status of the case is. The Ngqeleni police never even visited the victim and briefed him on the case.”

A heartbroken Dlanaye said his grandson died a broken youth who had not seen justice being done.

“An inquest docket has been opened.”

Responding to claims that police had failed the family, Fatyela said the matter had last gone to court in November last year. However, they did not have an update on what happened.

“We are following up as to why the complainant or victim was not given feedback on the case.

“According to SAPS regulations, a complainant must be regularly given feedback on the case as it progresses and not be left in the dark.”

Noluthando told the Daily Dispatch her grandson had shown no sign of suicidal tendencies during their weekly visits to him in hospital.

It was only last Monday that they realised he was looking drained and feeling frustrated.

“He denied that there was something worrying him. But two days later Minentle committed suicide,” said the grandmother.

She said she spoke to him on the phone an hour before he took his life and “he sounded happy”.

The pair’s son, Minentle’s uncle Mzuyanda, is still traumatised after he made the gruesome discovery of his nephew hanging by a nylon rope in the main rondavel at the family homestead at about 4pm last week Wednesday.

“I still have flashes of what I saw. It is very frightening and has left my heart broken. I cannot forget even if I close my eyes, what I saw comes back as if it I something that is happening now,” said Mzuyanda. — lulamilef@dispatch.co.za