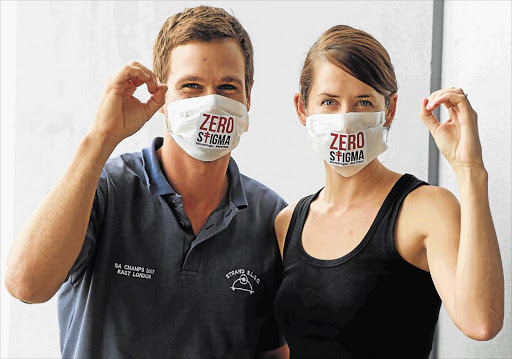 IN IT TOGETHER: Dr Nils von Delft and his TB activist wife Andrea could not believe it when Von Delft tested positive for TB a year ago. Healthy, fit and active, Von Delft only exhibited one of the disease’s symptoms, a persistent cough. They both now work to eliminate the stigma of the disease Picture: ALAN EASON
Tuberculosis (TB) kills more South Africans than car accidents, strokes and heart attacks.

As a medical professional Dr Nils von Delft, knowing this fact, thought, in retrospect, that perhaps he should have taken more precautions.

The doctor, who specialises in anaesthetics, completed his degree at Stellenbosch University and proceeded to do his two-year internship and one year of community service at Frere Hospital before taking a year to travel the world with his wife, Andrea.

In 2014 the couple returned to South Africa and settled in Cape Town, where Von Delft did shift work for general practitioners and private sector facilities in their emergency room sections, working flexible hours.

It was during this time that he was diagnosed with the disease.

“I could’ve contracted TB anywhere along that line. We don’t know because it can remain dormant in your body and flare up at any time,” he said, explaining that for as long as the disease was dormant in your system you were not contagious.

TB is a bacterial infection that can spread through the lymph nodes and bloodstream to any organ in your body. It is most often found in the lungs.

Von Delft recalls being at his healthiest. He said he was stress-free because of the nature of his working hours at the time.

Wife Andrea, a TB activist, said when you contract dormant or latent TB, you may breathe it in.

However, because your immune system is strong enough to fight it off, you don’t infect anyone.

Von Delft, who is now based in East London, was 29 when he was diagnosed. He said he had falsely believed that since he had not contracted TB by that time, in his line of work, he was never going to get it.

“I falsely believed that because of the strain of my job I was at higher risk. But by this time I thought I was probably immune and wasn’t careful enough to take the preventable measures.

“Also, because I was working in private you feel like you are at a lower risk because you don’t deal with HIV and TB patients as frequently as you do in public. I also wasn’t stressed and overworked. I was enjoying my life, exercising, fit and getting enough sleep.”

Von Delft remembers the week before his diagnosis last year.

He competed in a surf-ski paddling race and beat many of the paddlers who usually beat him.

“They were asking me if I had been training in secret because I was so fit.

“I was diagnosed a week after World TB day last year and Andrea had just started working for TB Proof.”

TB Proof is an organisation advocating education of healthcare professionals with regard to TB and how to protect against it and be aware. It was co-founded by Von Delft’s sister-in-law in Cape Town after she, also a medical professional, contracted multi-drug-resistant tuberculosis.

The organisation runs a social campaign leading up to World TB Day, called #UnmaskStigma, which encourages the elimination of stigma related to the disease.

Von Delft had been busy assisting in this campaign last year, educating and informing healthcare professionals and friends on how the disease could be contracted by just about anyone, and how people never think it can happen to them, and how one could be infected and not even know.

“Meanwhile I was the one infected and I was probably coughing it out without knowing.”

He had just started coughing around about the same time, but thought nothing of it.

Andrea encourages early diagnosis and treatment of the disease but said at times symptoms can be vague and mild for some time, and only once the person gets sick do the symptoms become obvious.

Von Delft said he experienced no symptoms besides the coughing.

“So because of the campaign, and because we had a history of TB in the family, and my cough had persisted for two weeks, I thought let’s do the right thing.

“I didn’t think I had TB but I thought let me go do an X-ray and cough up a sputum so that no one would point a finger at me and say ‘well why didn’t you test’?”

Going for the X-rays, he was greeted by sceptism and confusion as to how a doctor thought he could have TB.

“The chest X-ray came back 100% clear, which gave me false security.

“But then to be thorough I still handed in a sputum the next morning and kind of forgot about it until that evening.

“It was the Thursday before good Friday and my phone rang and I saw that it was the lab and already I knew.

“They said ‘sorry but your sputum is coming up positive for TB’.

“That was obviously a very big shock and immediately you feel afraid because I deal with TB on a regular basis and I knew what it could do to you.”

He said he was mostly afraid of the strain being one of the drug-resistant types and he was also scared of the side effects of the medication.

With the drug-resistant strains, treatment could last around two years.

Ordinary drug-sensitive TB takes six months to treat. Von Delft said the first instinct was to bring his family together and pray.

That night was a hard one because he had to wait until the following morning to find out if it was a drug-resistant strain or not. Luckily it wasn’t. However, after further testing it was found he was sensitive to one of the treatment drugs, which meant he had to take more drugs and his treatment was increased to nine months.

Von Delft said it was important for TB treatment to be individualised to specific cases. However, the public sector didn’t always have this luxury.

“I was taking 17 tablets a day for nine months. I was very fortunate that I had very few side effects on the treatment. I was booked off for the first two-and-a-half months so that I wouldn’t infect patients and colleagues.”

Andrea said the first two weeks after the symptoms appear were critical as this was the time a patient was most infectious. During that time a patient is advised to wear a surgical mask to minimise the amount of bacteria that spreads.

Von Delft spent the nine months in a separate room outside the house to avoid infecting his family, and he wore a mask around people, which he took off when he was in his room or outside.

She said two factors influenced the risk: the degree of exposure to sick patients coughing and spreading lots of bacteria; and length of exposure.

Van Delft said although he had been treated and cleared, he was still in danger of contracting the disease again.

“If you’ve had TB, in general, you are at a higher risk of contracting it again because your lungs are damaged. Another reason could be that the initial treatment did not sufficiently clear the bacteria,” he said.

There could be a number of reasons for this, he explained, saying it was often difficult to stay on the treatment due to some of the side-effects, which include loss of hair, nausea, vomiting, and pins and needles, among some others that can be life-threatening.

Said Andrea: “You can’t go through this disease on your own. TB is the number one killer in our country. It kills more people than ebola, lung cancer, heart attacks, HIV, strokes and car accidents. And directly opposite to that is it’s so sad because it’s 100% preventable and curable.”

She said stigma was the biggest obstacle to disclosing and treating.

Andrea said that facilities can have the best resources but if people didn’t come out to utilise them then the disease would not be stopped.

The #UnmaskStigma campaign is a social media campaign where people are encouraged to wear a mask in solidarity with patients and post pictures of themselves in masks on social media on World TB Day. — vuyiswav@dispatch.co.za