Leading to a green future 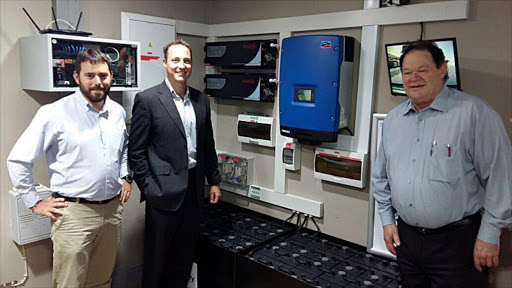 GREEN ROOM: Nic Sanan of Ellies Renewable Energy, Border-Kei Chamber of Business energy chairmanr Chris Ettmayr and BKCOB executive director Les Holbrook in the energy-saving heart of the chamber’s building in The Hub, Beacon Bay, which is the only green chamber building in Africa Picture: SIBONGILE NGALWA
The Border-Kei Chamber of Business (BKCOB) has become Africa’s only green chamber building and will be drawing up a blueprint of its new energy-saving methods as a model for others who want to move off-grid.

Chamber House, which is situated at Beacon Bay’s The Hub complex, was adapted into an energy efficient building in June and was officially launched yesterday.

The initiative should save the chamber about R14000 on electricity bills annually. And, although it is still connected to the grid which kicks in during periods of sustained cloudy weather, only the air-conditioners run off Eskom power on a daily basis.

BKCOB executive director Les Holbrook said when the chamber moved into and renovated the building three years ago the energy-sapping light fixtures had to be replaced in a green conversion.

Much of the new technology was donated or sold to the chamber at cost price and this cost should be recovered over 36 months of use.

BKCOB energy forum chairman Chris Ettmayr said the project had been triggered during the dark times of load-shedding, when despairing companies approached the chamber for advice.

“We are advocates of renewable energy and know many companies want to do the right thing, but some were burning their fingers by using service providers that were not accredited. We received complaints that their new systems had failed completely.

“So we decided it was pointless just to preach and did an installation ourselves.”

Following an energy audit, the green conversion was designed and installed by Nic Sanan of Ellies Renewable Energy. It includes LED lighting and passive motion sensors which sense when rooms like the kitchen or bathrooms are occupied and automatically triggers and switches off lights.

Downstairs a small room dubbed the green room is devoted to the heart of the system, with two UPS converters, battery banks and a CCTV monitor which displays the gleaming solar panels on the roof without having to climb up ladders.

The transformation to green has been so successful that the chamber is now considering becoming an energy supplier to neighbouring buildings.

“We are already providing energy to other tenants and want to be refunded for that. Some tenants also want to buy energy from us so we could be an energy supplier if we expand our system and get the right approvals,” said Ettmayr. “This could be called the Green Hub.” — barbarah@dispatch.co.za