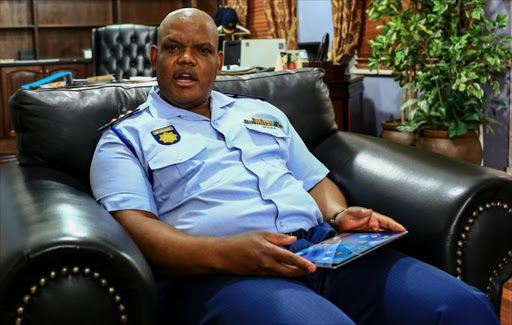 phahlane
A total of 831 arrests have been made during #FeesMustFall protests this year‚ South Africa’s police chief disclosed on Friday‚ as he charged that the student campaign for free tuition has been hijacked by criminals.

After highlighting some of the most serious incidents of criminality‚ Phahlane told a news conference at the end of a three-day police management summit: "The question again arises: has the legitimate #FeesMustFall initiative by students been taken over by criminals to a large extent?"

Phahlane said there had been a sharp upturn in arrests at protests in the past couple of weeks. This was as a result of an increase in violence‚ as a result of which #FeesMustFall was now "characterised by criminality".

He referred to incidents such protesters rampaging after dark through the streets of Braamfontein‚ near Wits University‚ looting shops and burning buildings.

He said police had been at pains to react with minimal force even when they were "attacked and pelted with stones".

Police deserved credit for containing the protests while operating under what he called "tremendous pressure".

Said Phahlane: "There are those who have bombarded us with calls to withdraw police officials from university campuses. We reiterate that it is the violence and criminal acts being committed on those campuses that have invited the presence of the SAPS.

"We congratulate those students who have heeded calls to focus on their studies while their legitimate concerns are being dealt with by the relevant authorities."

In the latest arrest‚ on Friday‚ Phahlane said a 33-year-old contract cleaner from UCT had been arrested for allegedly breaking the windows of a police vehicle during Wednesday’s protests outside Parliament in Cape Town as Finance Minister Pravin Gordhan presented his Medium Term Budget Policy Statement. "He will appear in court on Monday facing a charge of malicious damage to property."