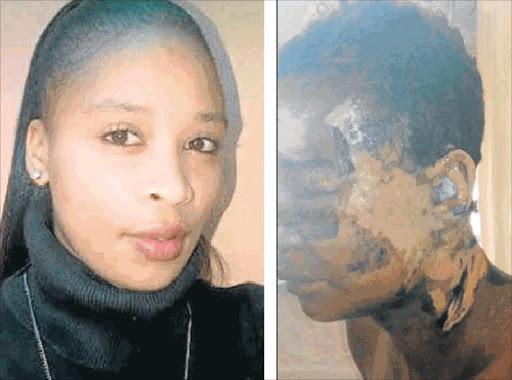 IRON TERROR: Mihle Sibembe before and after the Christmas Day attack Picture: SUPPLIED
A woman was burnt with a hot iron on her face, stomach and thighs, allegedly by her boyfriend during an argument over a Facebook picture.

After the attack the 26year-old law student, Mihle Sibembe, was stuffed in a drawer mounted underneath the bed of her boyfriend, Thozamile Gawula, 30.

She survived the horrific attack and was rescued a day later by her worried mother. The incident occurred in Mthatha’s Khwezi Township on Christmas Day.

Her emotional mother, Zodumo Sibembe said yesterday: “My daughter was spending Christmas with her boyfriend at his home when he saw a picture of her and her Fort Hare university friend on Facebook.

“He began beating her and then burned her with an electric iron and hid her underneath his bed.”

Sibembe said she was informed of the incident on December 26. The family lives in neighbouring Mbuqe Park.

Mihle was rushed to Nelson Mandela Academic Hospital, where she was treated for multiple injuries.

Gawula was arrested on Tuesday last week in connection with the attack. He appeared in the Mthatha Magistrate’s Court on Thursday last week, and was released on bail.

Sibembe said Mihle’s condition worsened this week, causing her to be admitted to Mthatha General Hospital.

Upon hearing that her lastborn’s alleged attacker had been granted bail, Sibembe collapsed, and was taken to hospital.

“My daughter left home in the afternoon on Christmas Day and she did not come back that day,” Sibembe said. “I received a call from her friend on Monday, saying that my daughter had been burnt. I then went to her boyfriend’s place to look for her. I found him sitting outside, and he told me he had not seen Mihle since Christmas Day.” She said she went to report the matter at Ngangelizwe police station.

When she could not find help, Sibembe walked to the nearest taxi rank, where she told the story to a group of men, who then accompanied her back to her Gawula’s home, where they searched for her daughter.

“We opened a drawer underneath his bed and found my daughter with severe burn wounds.”

“After she had regained consciousness Mihle said her boyfriend burnt her with an iron after he saw a picture of her and another guy on Facebook. The guy is her friend from Fort Hare University in East London.”

Mthatha police spokeswoman, Captain Dineo Koena said Gawula had been released on R800 bail, and the case was postponed to February 22. — zwangam@dispatch.co.za