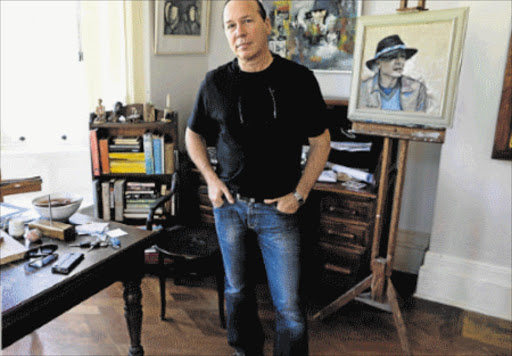 ART THEFT: Jimmy Cooras has offered a R1000 reward for the safe return of a painting by his late friend Terry Flynn, which was stolen along with an unfinished work by the artist from the Ann Bryant Art Gallery earlier this month Picture: ALAN EASON
Two seascapes by the late Ann Bryant Art Gallery assistant curator Terry Flynn have been stolen from the gallery just three months after his death.

Curator Leon du Preez said he was saddened and shocked by the theft, especially since one of the paintings was an unfinished work by Flynn, who was known by many as a talented artist and a unique, funny and generous soul.

The other piece, which depicts a Nahoon Beach scene, was owned by East London jeweller and Flynn’s close friend Jimmy Cooras, who had lent the painting to the gallery for a few months after Flynn succumbed to emphysema and pneumonia at Life St Dominic’s Hospital on November 17.

Cooras’s painting and Flynn’s unfinished work – also a Nahoon Beach scene – were displayed on two easels in the bay window of a ground floor exhibition room.

“We put up some of Terry’s work in the room which was also his office as a tribute to him for his wake, which was held two weeks after his death,” Du Preez said.

He said the theft was noticed by gallery office attendant Thembinkosi Golintete when he arrived for work on February 6.

Du Preez said intruders had snapped off the sash window lock of the room which faces the gallery’s gardens, slipped their hands through a narrow gap at the bottom of the burglar bars, and taken the two paintings which had been closest to the window.

“It is really sad. It seems like a form of disrespect to Terry, who was such a kind person, but I’m sure they were just opportunistic petty criminals. I try not to get too emotional about it.”

Du Preez said the “gallery gangsters” had also broken into an outside storeroom and stole spades, rakes and a long ladder. A case of theft was opened at the Cambridge police station.

Du Preez said there were plans to beef up security.

Sitting at what had been Flynn’s beautiful antique desk where he had played patience and which is still surrounded by small wooden sculptures and found objects which his friend had artfully tinkered with, Du Preez asked the public to be on the look-out for the pilfered paintings.

Cooras said he was now faced with a gap in his life due to his best friend’s death, as well as a gap on his wall where the Flynn seascape he bought eight years ago, had hung.

“The painting was influenced by Margery Bradfield and so it was different from his usual style and had very eccentric yellow dots and swiggles in the sky over Nahoon.

Cooras said he still had four paintings left in his Flynn collection, and was offering a R1000 reward for the safe return of his stolen painting. — barbarah@dispatch.co.za