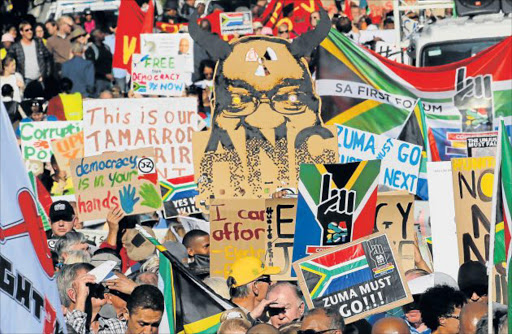 The future of President Jacob Zuma is now in the hands of ANC MPs, who are the majority in parliament.

The party’s leadership will today meet with the governing party’s MPs before the debate and voting on a motion of no confidence against Zuma.

The leaders, including Zuma himself, Deputy President Cyril Ramaphosa, ANC secretary-general Gwede Mantashe and treasurer-general Zweli Mkhize, are expected to attend the meeting in a last bid to avert Zuma’s removal.

Yesterday, National Assembly Speaker Baleka Mbete announced that the motion against Zuma should be debated and voted through a secret ballot.

Should Zuma win this time around, the consequences would be dire for the ANC, according to insiders.

The feeling is that a vote to keep Zuma in office would mean that ANC MPs support the relationship between Zuma and the controversial Gupta family.

It would also mean, by implication, that they support the rampant corruption that has taken root under his leadership. Mbete’s decision does count in her favour in her bid to become the next president of the ANC.

Mbete said she believed her decision was “in the best interests of our country” and would put “the resilience of the democratic institution to the test”.

Mbete said she had given consideration to the “toxified and highly charged environment” as well as to threats to MPs choosing to vote with their conscience in making her decision.

Mbete said she would not recuse herself from the motion of no confidence as she found claims that she could not be impartial to be “reprehensible and unpalatable”.

The Daily Dispatch has learnt that Mbete briefed ANC officials in Cape Town before announcing her decision.

The ANC caucus in parliament will have a crucial meeting before the debate on the motion of no confidence against Zuma. One of Zuma staunchest supporters, Umkhonto weSizwe Military Veterans’ Association president Kebby Maphatsoe, warned of instability in the country and deep divisions in the ANC if Zuma was removed.

“It is an easy decision to allow a secret ballot,” Maphatsoe said.

Maphatsoe lashed out at opposition parties, saying: “They think they can instruct ANC members how to be behave. No normal member of the ANC will go to the extreme of voting the ANC out of power.”

He vowed that ANC MPs, including those unhappy with Zuma’s leadership, would not allow his removal.

Opposition parties in turn welcomed Mbete’s decision and called on ANC MPs to use the opportunity to do the right thing.

At a press conference held by the leaders of most of the opposition parties after Mbete’s announcement, UDM leader Bantu Holomisa – who led the legal battle for a secret ballot – said he hoped all MPs in parliament would use the opportunity to “put South Africa first”.

“It’s time for public representatives to honour their oath of office,” he said.

EFF leader Julius Malema said Mbete’s decision appeared to be against the party line, and he hoped her example would allow ANC MPs to feel like they could do the same.

“If Baleka went against the party line in the open, what stops an ANC MP from going against the line in secret,” he said.

IFP chief whip Narend Singh said that while ANC chief whip Jackson Mthembu had previously indicated that removal of the president could be a “nuclear bomb”, he hoped the bomb would be “cleansing”, ridding the country of “graft and corruption”.

He was hopeful that South Africans would wake up to Mbete as acting president on Women’s Day.

COPE leader Mosiuoa Lekota called the decision “groundbreaking” and said it now placed the responsibility “squarely on the shoulders of the men and women in parliament”.

ACDP leader Reverend Kenneth Meshoe said he was “delighted that rationality had prevailed”.

The motion – the eighth of Zuma’s presidency – will take place at 2pm today. — DDC