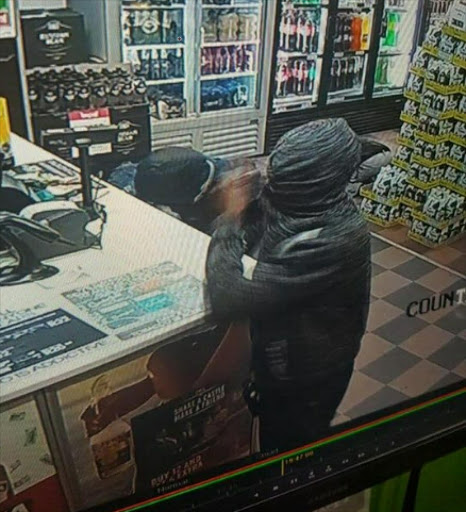 tops
The East London police are still looking for two suspects whose video of their  shocking robbery at  Tops Liquor Store in Quigney over the weekend went viral.

The suspects  made off with a large amount of money from the till after overpowering two security guards and held two staff members at gunpoint.

A third staff member hid inside the walk-in beer freezer and called the police.

A video is going viral on social media showing two pistol-wielding, balaclava-clad suspects throwing customers and staff to the ground and holding a gun to the cashiers to empty the tills.

The robbery took place during busy business hours on Friday evening. In a video doing rounds on social media, the men can be seen entering the store pointing guns.

A visibly terrified security guard with hands in the air could be seen pleading for his life standing behind the door while one suspect furiously waves a gun at him.

The suspect shouts and goes straight to the guard grabbing him violently before dragging and tossing him to the floor to join a woman  security colleague.

Few customers could also be seen lying flat on their stomachs others in praying positions. The dramatic scenes are caught on the store's CCTV footage.