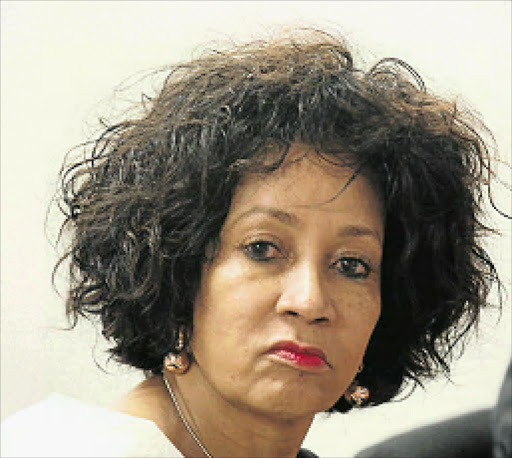 ANC presidential hopeful Lindiwe Sisulu during the King Sarhili commemoration in Hoyita near Cofimvaba on Friday. Picture: LULAMILE FENI
ANC presidential candidate Lindiwe Sisulu has questioned the struggle credentials of Gwede Mantashe, the party’s secretary-general, and blasted him for what she claimed was an abuse of his freedom for personal gain.

The vocal Sisulu blamed Mantashe for a weakened tripartite alliance, saying it had become weaker on his watch as the ANC’s enforcer of discipline, as had the formation of two breakaway parties, COPE and the EFF – which had further weakened the governing party.

Sisulu laid into Mantashe for publicly endorsing Deputy President Cyril Ramaphosa for the ANC presidency, saying his stance showed that he “lacks the necessary objectivity and credibility to run a democratic conference” in December.

In recent weeks Mantashe has been vocal about the party’s succession debate, saying to avoid a crisis, President Jacob Zuma should hand over power to Ramaphosa.

However, as Zuma has argued, Sisulu said it was not a given that a deputy became president.

Pointing to her own struggle credentials and those of others who had “led from the front like Winnie Madikizela-Mandela”, Sisulu said women had all the skills needed to lead the party.

“In all the time the ANC was operating underground very difficulty circumstances, women who saved the ANC.

“The question is: where was he when we were fighting for this freedom in exile and in jail, which he today is abusing for personal interests?” she charged.

“He must hand over an ANC that is intact. Under him as an SG we gave birth to COPE and EFF and fractured Cosatu – something we never imagined. How can we forget that 2019 is around the corner? While we are sitting out on a yellow card from losing crucial municipalities, what is this obsession about positions?”

Sisulu, who has been criss-crossing the country drumming up support for her presidential ambitions, has called on Mantashe to step down as SG and run Ramaphosa’s campaign instead.

“Gwede has himself from running the conference because he lacks the necessary objectivity and credibility to run a democratic conference.

“And he is using his position for his personal interest and to the advantage of his friends. The shameful patriarchal attitude he displays shows he has not understood the ANC and its values.”

Sisulu said this shortly after speaking at the commemoration of AmaXhosa King Sarhili at the Chris Hani Centre at Sabalele village near Cofimvaba at the weekend.

Ramaphosa and Dlamini-Zuma are seen as the frontrunners as they have publicly been endorsed by the ANC Women’s League, the ANC Youth League, the SA Communist Party and Cosatu.

While Mantashe’s name has been bandied about in ANC circles as the party’s chairman candidate on the Ramaphosa slate, Sisulu said the Cala-born heavyweight had been eyeing Dlamini-Zuma as the new deputy president.

“Gwede wants Nkosazana to deputise Cyril. His view is that if a woman is given the chance to lead now, then the conference will be paralysed as there is currently no woman with the capacity to avert the crisis in the ANC towards December.

“This merely shows his knowledge about the ANC, which he mistakenly believes Mbeki handed over to Zuma, forgetting that there was a contest.

“He imagines things. Since when branches taking their tune from the SG? What kind of an SG is this? We have never had an SG who infringes people’s rights.

“He thinks we are picking a Bafana Bafana squad here.”

The former political prisoner said given the chance, she would school the former National Union of Mineworkers general-secretary in party discipline. “In his view conferences are about positions and friends. He is discounting the roles his mother played when she nurtured him to be what he is today, while paradoxically refusing to be led by a woman.

“I wish I can have coffee with him around the women’s struggle in the ANC. I wish he had been in exile to understand what organisational discipline means. To some, conferences are about proximity to dinner tables,” she said.

In an interview yesterday, Mantashe hit back at Sisulu.

“We have six NEC members who all want to be president. It is the same NEC that should have held the ANC intact, but all are contesting each other,” he said.

He confirmed that he could not be neutral because “I cannot be expected to be an island in an ocean of contestation”. Mantashe said he could not be held personally responsible for the party’s misfortunes.

“It is mischievous to say that the ANC in my time is not intact, as if I am the president,” he said.

“Contestants will always try to find someone at fault so as to build a case even if it does not exist, so as to strengthen their campaign. Lindiwe is one of the contestants.” — lulamilef@dispatch.co.za