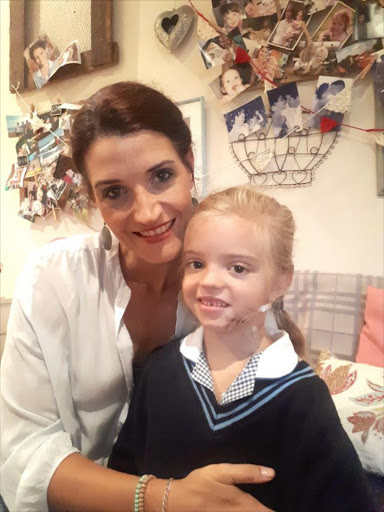 Mikayla Grove made a miraculous recovery following "medical expertise‚ caring cooperation and 17 vials of antivenom" and has now even started "big school".

"Mikayla was very excited to attend her first day of primary school‚ or ‘big school’ as she calls it‚ the week after her discharge.

"We have spoken to her about her experience and I think she understands what she has been through. Mikayla was glad to hear that the snake that bit her was not killed but was released back into the wild‚” her father Ludwig Grove said.

Mikayla was bitten in the face at her Ballito home while she slept.

“It was a warm Sunday evening in mid-January when my wife‚ Inge‚ and I had put the children to bed when suddenly‚ around 8pm‚ we heard a scream coming from the bedroom shared by our daughters‚” said Grove.

Upon investigating‚ his wife heard a loud hissing noise and a stream of venom was sprayed into her eyes.

While Inge started washing the venom out of her eyes‚ Ludwig noticed two small spots of blood on Mikayla’s left cheek and realised that she had been bitten.

“We bundled the kids into the car and took a bottle of water with us so that my wife could continue washing her eyes‚ as the snake’s venom can cause blindness if it is not quickly and thoroughly rinsed out of the eyes‚" Grove said.

Grove contacted a friend‚ who is a neonatal nurse at Netcare Alberlito Hospital to alert the emergency team.

Dr Bianca Visser‚ who has vast expertise in the treatment of snake bites‚ was immediately contacted to join the team treating Mikayla.

”Treating a venomous snakebite is highly complex. On my way‚ I phoned ahead to instruct the treating doctor to start preparing everything we would need‚ as a Mozambique spitting cobra bite to the face is almost always critical‚" she said.

Visser has vast experience in administering antivenom‚ as she previously worked at Ngwelezane Hospital near Empangeni‚ where up to 10 snakebites were treated a day in peak season.

“Mikayla’s condition was initially critical. She was agitated‚ vomiting‚ her face was swollen and there was imminent risk of her airway becoming obstructed. Mikayla was intubated and her airway was secured while the emergency department team started premedication with steroids and adrenaline to prepare her body to receive the antivenom‚" Visser said.

"If someone is bitten by a snake it is imperative that they receive appropriate treatment as soon as possible. We do not need to identify the snake to be able to manage a patient appropriately therefore people do not need to chase the snake‚ trying to catch or kill it before seeking emergency care‚” Dr Visser explained.

“We had to take Mikayla to theatre four times in six days to clean out the infection‚ and by the sixth day the infection was under control. There had been significant loss of fatty tissue‚ however‚ and a hole remained in her cheek.

“We created a small tissue flap from under her chin to close the skin‚ and removed the surgical drain that had been put in place to help clear the affected area‚" Pillay said.

He said that at a follow-up appointment shortly after her discharge‚ the child greeted him with a big smile.

"In a few months’ time we will need to transfer some fat to replace the lost fatty tissue‚ which gives structure and volume to the face‚" he said.