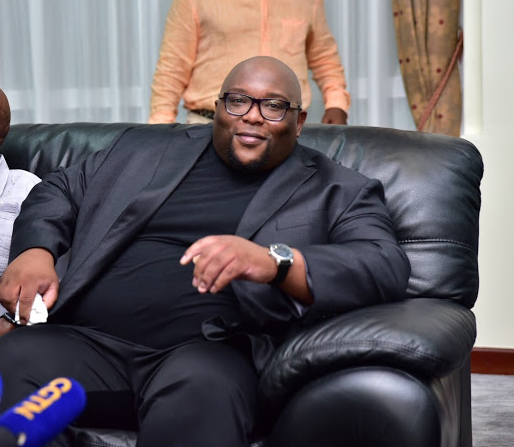 Maimane dropped the bombshell in the National Assembly on Tuesday when Ramaphosa appeared in the house to take oral questions from MPs - a session that started with the president taking questions on the VBS financial scandal.

Maimane used his chance to ask a follow-up question to raise the matter of Andile Ramaphosa and his dealings with BOSASA‚ a facilities management firm that has been at the centre of controversial government tenders involving several departments‚ politicians and other connected figures.

Maimane confronted Ramaphosa with papers showing how money was allegedly moved from a BOSASA business account to a trust account allegedly for the benefit of his son under dodgy circumstances.

"Now Mr President‚ here‚ I hold a proof of payment that was transferred to say‚ half a million rand needs to be transferred to a trust account called ‘EFG2’ on October 18 last year.

"This was allegedly put for your son Andile Ramaphosa. Following on to that‚ Mr President‚ I have a sworn affidavit from Peet Venter‚ stating that he was asked by the CEO of BOSASA that he must make this transfer for Andile Ramaphosa.

“Mr President‚ we can't have family members benefiting. I would want to ask you‚ right here today‚ that you will bring our nation into confidence and set the record straight on this matter‚ Mr President‚” Maimane said.

Ramaphosa admitted that the matter had been brought to his attention – and that he had confronted his son about it “some time ago”.

The president told MPs that Andile Ramaphosa had assured him that the payment was legitimate because he had provided a service to BOSASA through his business consultancy firm.

Ramaphosa said he would be the first to send his son "to jail" if his version of events would turn out to be false.

"I proceeded to ask my son what this was all about. He runs a financial consultancy business and he consults for a number of companies‚ and one of those companies is BOSASA‚ where he provides services on entrepreneurship and on procurement processes. And he advises both local and international companies.

"I can assure Mr Maimane that I asked him at close range whether this was money that was obtained illegally‚ unlawfully - and he said this was service that was provided. To this end‚ he actually even showed me a contract that he signed with BOSASA and the contract also deals with issue of integrity‚ anti-corruption‚” he said.

Ramaphosa added that he had previously told his family members not to trade with the state or any of its entities.

"But I do know from time to time‚ some of these errors‚ some of these activities‚ can surface. But the filter that I want you to know I apply as their father is that if there's any illegality‚ if there's any corruption‚ I'm going to be the first one and take them‚ if needs be‚ to jail myself because I will not allow that."

EFF leader Julius Malema said that if Ramaphosa's explanation was "acceptable" then the same should apply to Brian Shivambu.

"Because it can't be that if it's your children with contracts and invoices and they can account for the work they've done it's acceptable‚ but when it comes from Brian Shivambu it's a different matter altogether‚" said Malema.

"The question that was asked by honourable Maimane about my son Andile has nothing to do with VBS. That should be clear. It has to do with BOSASA‚ so he's not been involved with VBS‚" said Ramaphosa.