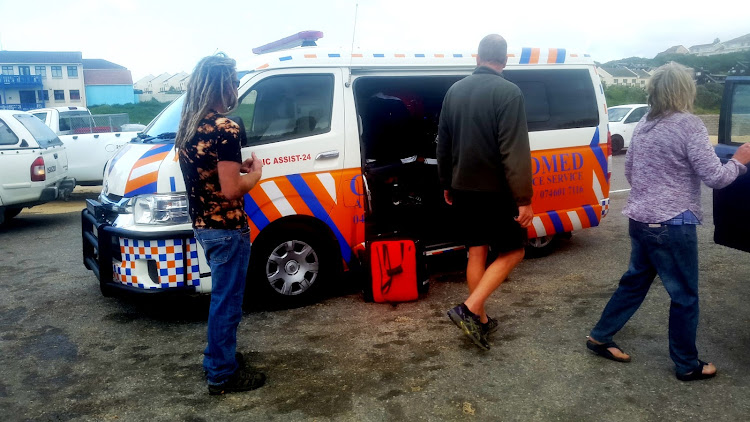 SHARK ATTACK: Surfers at East Beach were quick to get out of the water on Wednesday morning when a juvenile great white shark took a bite on Dusty Phelan’ leg. Worse, the shark apparently returned and bit Phelan again. Emergency services were on the scene shortly after and carried out first aid before taking the victim to hospital.
Image: ROB KNOWLES

Port Alfred's East Beach was shutdown on Wednesday morning after a shark, believed to be a juvenile great white, bit a surfer and then returned for a second helping.

Dusty Phelan was the victim in the incident that saw East Beach closed by Ndlambe Municipality until further notice.

Phelan was treated by emergency services who were quickly at the scene. After first aid had been administered Phelan was taken to hospital.

National Sea Rescue Institute (NSRI) spokesperson Craig Lambinon said the man, in his early 20s, was surfing at the town’s East Beach at about 10.30am when he was bitten by what appeared to be a juvenile Great White shark.

“Ndlambe municipal authorities, the SA Police Services, Gardmed ambulance services, Ndlambe Municipal Protection Services and NSRI Port Alfred duty crew responded to the scene, where the surfer was already safe out the water and attended to by paramedics for lacerations to his leg. He has been transported to hospital by ambulance in a stable condition,” he said.

“A cautionary advisory is issued by Ndlambe municipality for bathers and paddlers to be aware of this incident and to exercise caution around the coastline of Port Alfred.

- Talk of the Town