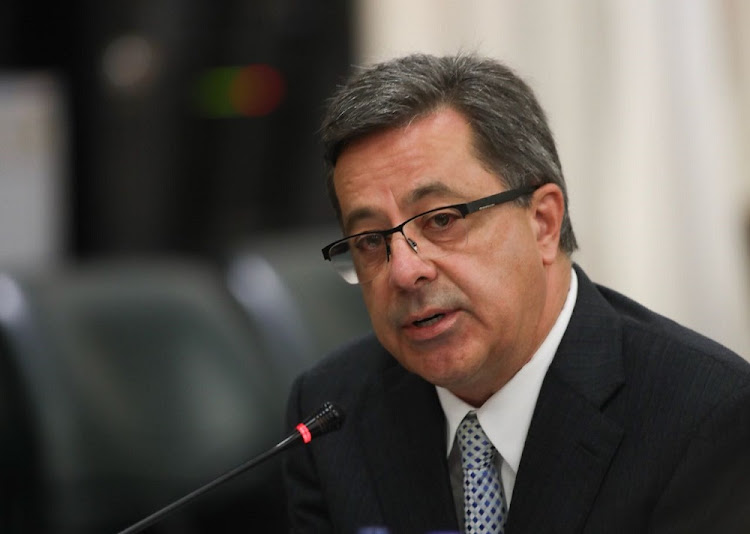 Former Steinhoff chief executive Markus Jooste is at the centre of South Africa’s biggest corporate scandal which wiped out shareholders’ equity and led to several resignations at the family..
Image: Esa Alexander

South African retailer Steinhoff reported a $401 million (R5.6-billion) half-year loss from continuing operations on Friday, as the damage from a massive accounting scandal drags on.

Steinhoff first flagged holes in its accounts in December 2017 — the warning shot for an accounting fraud since put at over $7-billion (R97,84-million) — shocking investors that had backed its transformation from a small South African outfit to a discount furniture retailer spanning four continents.

The owner of Mattress Firm Inc in the United States, Fantastic chains in Australia and Conforama in France said the loss from continuing operations came in at 356 million euros in the six-months ended March compared with a loss of 392 million euros a year earlier.

Excluding tax, the loss came in at 242 million euros.

“Although corporate and treasury services costs were much reduced, the operational results for the period continued to reflect the knock-on impact of the announcement of accounting irregularities in December 2017,” the retailer said in its 97-page half-year unaudited report.

“While every effort is made to limit costs, we expect this to remain our reality for some time,” Steinhoff added. Steinhoff, which is also listed in Frankfurt, said net sales from continuing operations increased by 3% to 6.8 billion euros from 6.6 billion euros, with strong contributions from Pepkor Europe and Pepkor Africa.

Shares in Johannesburg-listed Steinhoff jumped more than 14% at 1254 GMT and 13.19% in Frankfurt as the market focused on the operating profit before capital items from continuing operations figure, which more than doubled to 259 million euros from 101 million euros.

“Profits are up, turnover is up, they’ve still got the doors open, they’re still surviving and I suppose that’s good news,” FNB Wealth and Investments Portfolio Manager Wayne McCurrie said.

McCurrie also added that risk buyers were also pushing the volatile share price up. “If you’re a trader, you go in there, the share goes up 20% you’re out of there. So I don’t think anyone is buying this for the long term, they’re just buying it for the potential trade.”

This is the third time this year the retailer has published its results following the publication of its delayed 2017 and 2018 annual reports in May and June respectively. The publication of the unaudited half-year report addresses the company’s “disclosure backlog” and brings its financial reporting back up to date, it said.

South Africa’s biggest corporate scandal has all but wiped out shareholders’ equity and led to several resignations, including former Chief Executive Markus Jooste, who was instrumental in putting Steinhoff on investors’ radar screens.

It has negotiated and agreed the main terms of a restructuring deal, under which all its debt would be reinstated at par and be given a common maturity date of three years from the completion of the restructuring agreement.

Steinhoff, under new management, said the hard work to clean up its balance sheet after the fraud “will, in all likelihood, shortly come to fruition,” and stabilize the retailer which also has operations in Africa. It added that customer confidence in its offering has stabilised.

On Friday it said Pepkor Europe was well advanced in negotiations to refinance its existing term loan facility, which matures in 2020, with a successful conclusion anticipated in the second half of this financial year.