AmaMpondo AseNyandeni king Ndamase Ndamase is in advanced talks with international investors to invest in cannabis farming in his kingdom. 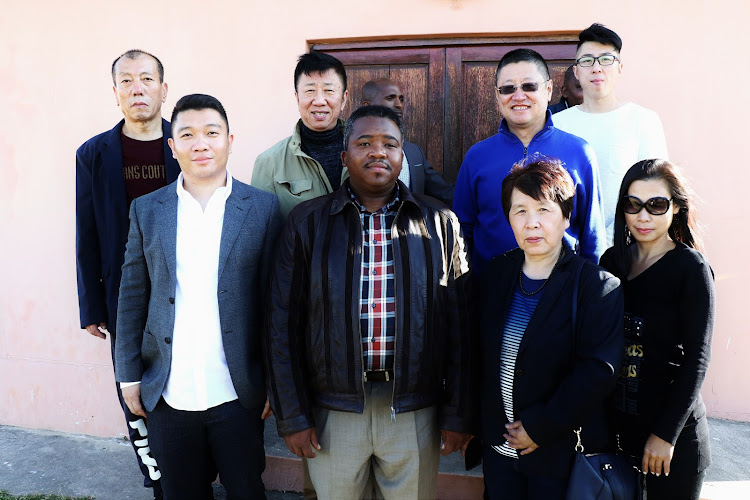 IDEA TAKES ROOT: AmaMpondo AseNyandeni King Ndamase Ndamase with a Chinese investor delegation who after the made presentations of their interest in investing in cannabis in the Mpondoland during their visit to Nyandeni Great Place near Libode.
Image: LULAMILE FENI

Dagga – intsangu – is flourishing in Mpondoland and grows well due to favourable climatic conditions. Its economic impact is so enormous that it is called the green gold of AmaMpondo.

Chinese investors have visited the Eastern Cape at least twice with a plan to invest in cannabis.

The AmaMpondo AseNyandeni Kingdom has entered into a memorandum of co-operation with SA Honglin Investments Pty Ltd to pursue agricultural development, including cannabis and hemp cultivation.

The royal house said this would assist with skills development, job creation and making Mpondoland a prime tourist destination.

Ndamase said a joint venture with Honglin would benefit his people and help address high unemployment.

In a nation where talk of “greener pastures” is as frequent as petrol price hikes, it is refreshing to hear references to them occurring within the ...
News
2 years ago

A Chinese business delegation led by South African Honglin chairperson Yong Lin visited Nyandeni Great Place near Libode recently to make presentations to the king, traditional leaders and the community on their intended multi-million investment into the kingdom.

They intend to invest more than R100m for the first commercial cannabis phase, which includes trials, according to the royal house.

Ndamase’s spokesperson Jongushapho Bokleni said: “Talks are advanced and traditional leaders and their people have bought into the idea and this will come with more job opportunities in Mpondoland. We do not have mines here, but we have land which is rich for cultivating cannabis.

For the Khoi and San, cannabis coming into the commercial mainstream is simply the next logical step in the indigenous knowledge revival sweeping ...
News
2 years ago

“We have talked of cultivating 30 hectares of cannabis for now. The king has put forward his farm at Mhlanganisweni in Libode for the cultivation of cannabis. But for the trials, the joint venture will start with two hectares between August and September.’’

Honglin spokesperson Oliver Lin said of the proposed multi-million investment: “The total investment is a non-disclosure for now. It’s a business secret. We have planned to farm cannabis on the king’s land. We will send our experts and technicians to teach the people, to train them, and will also be buying the cannabis products from them. This means the solution of economic problems, and more job opportunities as well.”

He confirmed that their delegation had visited the Eastern Cape.

“All the studies and survey reports have been done already together with the king and his consultants, also with our cannabis professor and Mr Lin. So now we are in the implementing stage. We are working on the licence and other documents from the South African government,’’ said Lin.

Traditional marijuana growers in the Mbizana municipality have called on the government to prioritise them in its plans for turning their ...
News
2 years ago

The promotion of dagga agriculture and benefication is high on the agenda of premier Oscar Mabuyane, especially in the Mpondoland region , where villagers have been growing dagga for many decades and used the income to build their homesteads and send their children to schools.

DispatchLIVE has reported Mabuyane as saying the provincial government was busy putting together a team from the departments of economic development, economic affairs and tourism, plus the department of rural development and agrarian reform to work on feasibility studies.

Wandile Sihlobo, head economist at the Agricultural Business Chamber (Agbiz) said a report by Europe-based market intelligence and strategic consultancy firm Prohibition Partners, highlighted that Africa’s legal cannabis industry could generate more than R99.6bn a year by 2023 if more of the continent’s major markets open up and follow the trend of legalisation in the US, Canada and Europe. According to a UN survey, more than 38,000 tons of cannabis is produced in Africa each year.

Cannabis set to be ‘saviour plant’

Some of the most inaccessible regions of Transkei will become SA’s most valuable agricultural land, and overseas companies have their eyes on it, ...
Business
2 years ago