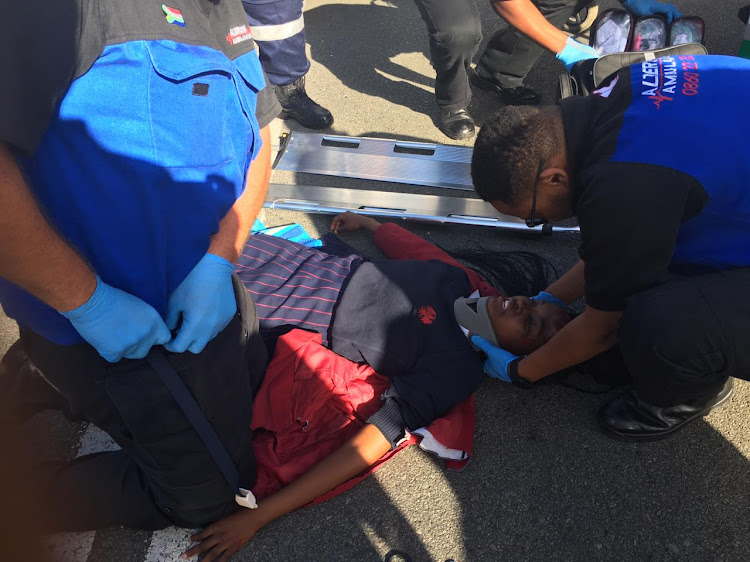 Paramedics attend to Lathitha Mkencele, 15, after she was knocked over by a car while crossing the road to school.
Image: SUPPLIED

A 15-year-old Hudson Park High School pupil will not finish her final exams this year after she was hit by a car outside the school in front of her horrified father last week.

Nontando said she feared the school might make her child repeat the grade.

Lathitha was trying to cross the road outside the school building in lower Devereaux Avenue to where her father, Thabo Mkencele, had parked, when she spotted a VW Citi Golf allegedly speeding towards her.

Her mother said Lathitha had stopped and stood on the white line in the centre of the road waiting for the car to pass.

“She [Lathitha] said to her horror she noticed the car driving straight toward her.

“My child was knocked out and woke up in hospital.”

Nontando said her daughter had swelling to the face and bruises all over her body.

“She can speak and is under the good care of doctors. Her head did not suffer any permanent injuries.

“I have been praying and my prayers have been answered. The swelling is the only major concern.”

She was due to write an arts paper the next day.

Due to the accident, she will not complete the upcoming technology, maths, business economics, history, English and isiXhosa papers with her classmates.

Nontando said police were at the scene and that she would open a case once her daughter was discharged from hospital.

The school secretary, Caryn Sirgel, said the principal was in a meeting and promised to pass questions on to him.