From warnings to deaths - five must-read stories on KZN storms 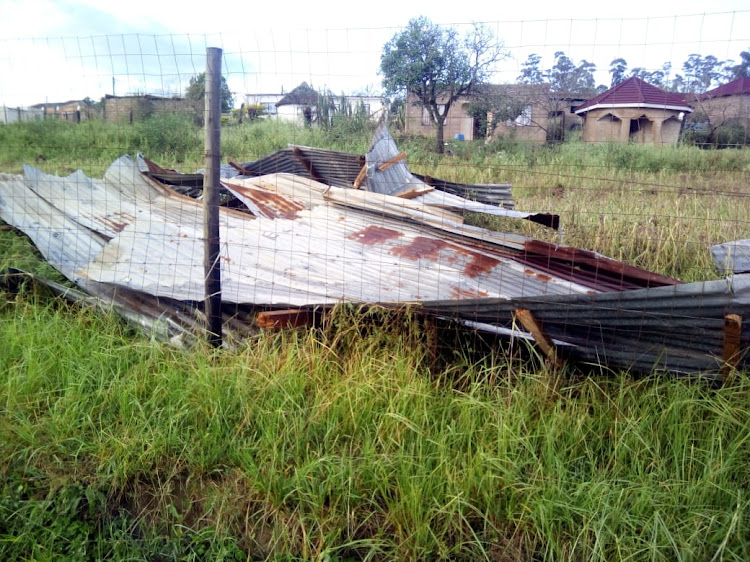 Homes and other structures were blown over when a storm ravaged parts of KZN this week.
Image: KZN Department of Co-operative Governance and Traditional Affairs

Residents of KwaZulu-Natal are living in fear amid thunderstorms and floods that have destroyed homes and lives.

The Midlands, north coast and parts of Durban were most seriously affected.

Four people, including two teenagers, lost their lives two weeks ago in Mkhuze, in the northern part of the province. Government officials told TimesLIVE they believed the four were killed by lightning. Cogta MEC Sipho Hlomuka conveyed condolence messages to the affected families and said the government would deploy a disaster management team to assist with aid.

Hlomuka told TimesLIVE that the government was on high alert after the deaths in Mkhuze. He cautioned people in areas prone to lightning not to walk on walkway bridges during storms and to be on high alert. Hlomuka expressed confidence in his team's ability to rescue those affected by floods.

“Our disaster management teams are on standby in areas prone to flooding and they will be monitoring the situation. We have full confidence in our teams' ability to provide the necessary support should the need arise.”

On Tuesday, a 7-year-old boy was swept into the flooded Nonoti River on his way home from school in Darnell , on the KZN north coast. IPSS Rescue's Dylan Meyrick said rescue services had called for a sniffer dog to help them. However by 5:30pm, when the search was called off, the boy had not been found. His body was recovered the next day, IPSS said in a statement on Wednesday.

Durban’s heavy rainfall is likely to bring to the surface certain potentially dangerous snakes, as well as less harmful ones
News
1 year ago

On Thursday Storm Report SA posted footage of a “tornado” in Bergville, KZN. Ayanda Ntsele, a forecaster at the SA Weather Service office in Durban, clarified that the “tornado” was in fact a “funnel cloud.” Ntsele said although a tornado was detected, it had not touched the ground.

Bergville, according to Ntsele, is prone to severe weather conditions.

“SAWS issued a warning for severe storms, with damaging wind, hail and heavy [rain] falls. Around Bergville, most of the time, when there are storms, there are fatalities and injuries from lightning. The area is very prone to thunderstorms.”

Two people died and 20 sustained minor injuries when a powerful storm hit Mpolweni, near Wartburg in KZN on Tuesday. ER24 spokesperson Ross Campbell said paramedics responded to the scene at about 5:20pm.

According to Campbell, two people were declared dead on the scene. “Provincial medics were already on the scene, having assisted with nine patients. Two adults were unfortunately declared dead. ER24 set up a triage area and treated and transported a further nine patients with minor to moderate injuries to various hospitals in the area.”