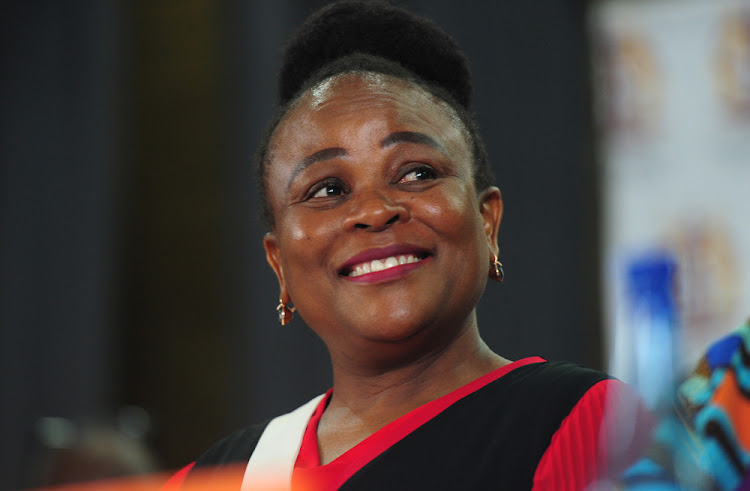 Public protector Busisiwe Mkhwebane is defending an accusation by her former COO that she abused her office and violated the constitution.
Image: Thapelo Morebudi

Public protector Busisiwe Mkhwebane has rejected an accusation by Basani Baloyi, the fired chief operating officer of her office, that she played politics with her reports and was “playing chess with the country”.

Baloyi has approached the North Gauteng high court to get her job back and have the court declare that Mkhwebane abused her office and violated the constitution.

In an affidavit filed in response to the application, Mkhwebane said Baloyi was trying to create sensationalism around her dismissal, which she deemed to be fair.

She defended what Baloyi called a “disturbing” message, where Mkhwebane said she had to “play chess” in reference to the rogue unit investigation involving minister Pravin Gordhan.

“That is the nature of the inevitable chess game that comes with the territory of the office. Like a literal chess game, it features kings, queens, knights and no shortage of witting and unwitting pawns,” Mkhwebane told the court.

Baloyi said the message showed that Mkhwebane was playing a political game with her reports.

The message read: “COO. I worked with few people to deal with the sabotage of the [Pravin Gordhan] camp. The notice is almost ready for rogue, will issue this week and report will also be issued in the manner I will determine. The notice for the president is also ready, will call him this week to discuss the notice. It is not about you but one has to play chess.”

Mkhwebane has since told the court that her “reference to chess was obviously in respect of our defensive moves to counteract the sabotage and unwarranted attacks directed at the office of the public protector”.

She said she was defending her office against attempts by Gordhan to discredit it.

“If there was any alleged 'game' it was initiated by our assailants and we were entitled to defend the integrity of the office. We shall always continue to do so, as we are duty bound by the constitution,” said Mkhwebane.

Baloyi not only wants to get her job back but also the court to declare that Mkhwebane abused her office and violated the constitution.

She referenced four controversial reports - all of which are under review - to blow the lid on Mkhwebane’s alleged unlawful actions, unethical conduct and breaches of processes.

It took an Eastern Cape municipality just one hour and 45 minutes to receive four bid documents for a multimillion-rand integrated financial ...
News
2 years ago

She said the way Mkhwebane handled the complaint concerning the R500,000 payment by Bosasa to President Cyril Ramaphosa’s CR17 campaign and the "rogue unit" investigation against minister Pravin Gordhan were "extremely unusual".

Baloyi said Mkhwebane refused to investigate an allegation made by the late Bosasa head, Gavin Watson, that he also donated to the NDZ campaign of minister Nkosazana Dlamini-Zuma.

Mkhwebane denied all accusations made against her, saying she could not investigate the NDZ campaign as the law did not allow for it, and it was not unusual for her to reduce the team involved in the investigation.

She further denied a claim by Baloyi that she abused her office for personal gain.

“The reasons why the contract was terminated relate to the applicant’s poor performance and clear non-suitability for the senior position of COO. These reasons are well articulated in the correspondence and simply corroborated by even a reading of the founding affidavit which demonstrates her lack of judgment and aptitude,” Mkhwebane argued.