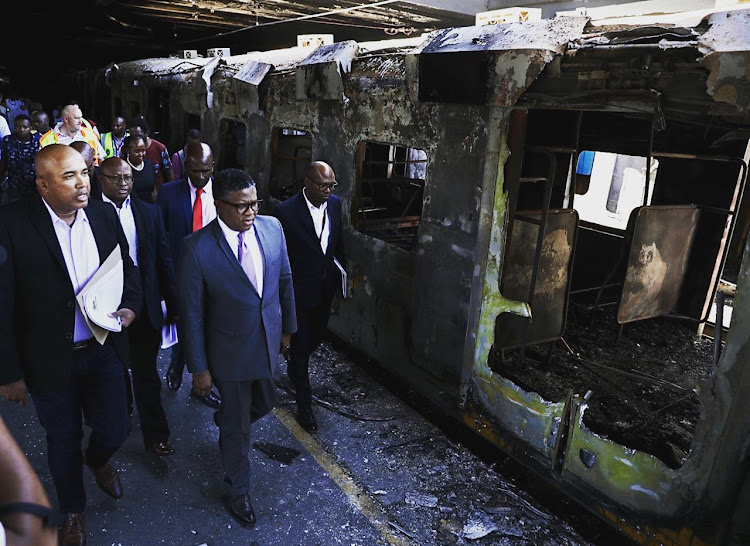 An “unprecedented” arson attack at Cape Town’s rail network hub in the city centre was in retaliation for the cancellation of “irregular” security contracts.

So said transport minister Fikile Mbalula in a fiery speech as he stood next to the husks of two burnt out trains at Cape Town station on Thursday.

Ash and acrid fumes whirled in the air around Mbalula as he also announced that four suspects were identified as having set 18 carriages on fire, thereby completely destroying two full trains just before 3am that morning.

“We are under no illusion that the recent cancellation of security contracts by Prasa is a contributing element to the heightened lawlessness,” he told reporters.

Cost estimates put the damage at R61m, nearly 10% of the total cost of damage from the arson attacks which started five years ago, and which saw 213 coaches go up in flames at an estimated cost of R643m.

Mbalula described the arson attack as a “deliberate act of criminality” which was “clearly calculated to paralyse the Metrorail service in Cape Town”.

By October last year, Cape Town's Metrorail train stock was reduced by 50% after 46 train sets had been burnt since the fires started in 2015.

A Sunday Times investigation earlier this year found that the fires were an inside job, the result of labour disputes and a fight between the Passenger Rail Agency of SA (Prasa) and two unions representing security staff.

Thursday's fires are the biggest attack on a single station.

In April 12 carriages were torched, resulting in losses of R33m and the suspension of Metrorail regional security chief Ernest Hendricks and two other officials.

“Some of these acts of criminality are staged in order to force Prasa's hand to continue with an arrangement that was not only found irregular by the Auditor-General and the Public Protector, but one that has exposed Prasa to inside jobs,” he said.

“In the current climate where we society expects us to visibly demonstrate our commitment to uprooting corruption, malfeasance, state capture, it was critical for Prasa to regularise procurement that continues to perpetuate irregular expenditure, and the security contracts were one such area,” said Mbalula.

What was meant to be a cheaper mode of transportation has turned into a nightmare for train commuters in East London.
News
2 years ago

Earlier in the day, Western Cape MEC for community safety Bonginkosi Madikizela claimed that the provincial government was not approached to help with investigations into train fires.

Both he and Mbalula took up their transport posts after the May election.

But Mbalula accused Madikizela of politicking and said he thought they got along well.

“The DA government wants to take over trains and make trains in the metropole a metropolitan function. I’m open to talking about that. He knows where my office is; we can sit down and talk about that,” said Mbalula.

But both he and Madikizela agreed that intergovernmental co-operation was crucial to securing train services which were crippling Cape Town’s economy and affecting those in the lowest income bracket.

“When a train is cancelled due to shortage of trains as a result of criminal conduct, somebody’s livelihood is affected. The cries of workers who lose their jobs due to chronic late-coming as a result of trains that delay must spur all of us into action. If we throw our hands up in the air in exasperation, the criminals would have won,” he said.

Security measures have been ramped up after years of arson attacks, cable theft, vandalism, and criminals operating inside commuter trains even leading to the murder of train drivers and commuters.

New security cameras were also a function of this improvement but there were still parts of Cape Town station that were too dangerous for even security officials to enter alone.

According to Walker, out of 24 platforms at Cape Town station, 10 are too damaged due to arson attacks to be used by trains any longer.

Overhead electric cables droop across the tracks after their couplings were melted off.

Light fittings and plastic announcement boards are burnt and deformed at abandoned parts of the station only a few dozen metres away from the media conference, in an area long abandoned by Metrorail and occupied by vagrants and criminals.

A young man sitting on a platform with his feet dangling above the train tracks advised TimesLIVE reporters to use an open hole in the security fence if they did not want to pay for a ticket. He was taking a train back to Manenberg after “hustling” in the city, he said.

People could be seen trickling through holes in the fence, about disappearing into an abandoned part of the train station nearby.

“We have a contractor who has started work today on the earlier platforms which were burnt. We will also expedite the process through Mr Molefe’s department to ensure that we have a contractor on site with the platforms that were damaged as soon as possible,” said Walker.

“Fortunately, we can share that the police and the investigations team have found good leads with the CCTV cameras in terms of this morning’s incident and we hope that we’ll have about good results quite soon,” said Walker.

M4 in Mpumalanga, R61 in Eastern Cape the country's most dangerous roads

The N4 in Nelspruit, Mpumalanga, and R61 in Mbizana, Eastern Cape, have been declared the country's most dangerous roads.
News
2 years ago

Mbalula said that for years concerns were raised by the security cluster about the “unmitigated risks brought about by the proliferation of security contracts in the Prasa environment”.

“It is on that basis that we have committed that Prasa needs to strengthen its internal security capacity by directly employing personnel to protect its assets and environment, working closely with the Rapid Rail Police. Our commitment to create jobs through the insourcing of this service is unshakeable,” said Mbalula.

“This attack, coupled with the suspension of MyCiTy bus services to Khayelitsha, as well as the (existing) three-week-long suspension of services on the central line that services Mitchells Plain and Khayelitsha is felt the hardest in parts of our society that are being savaged by poverty, unemployment and inequality,” she said.

In a statement, Western Cape MEC for community safety Albert Fritz said he wrote to the provincial police ombudsman, JJ Brand, requesting an urgent investigation into the inability of police to resolve the deliberate attack on railway infrastructure.

“We have had several incidents of attacks on our train system over the past few months and police have been unable to bring anyone to book. I have therefore written to the office of the Western Cape Police Ombudsman to request that he urgently investigate the inability of SAPS in the Western Cape to resolve this deliberate attack on the burning of trains,” said Fritz.