PE man claims co-accused made him take part in robbery, murder of woman, 78 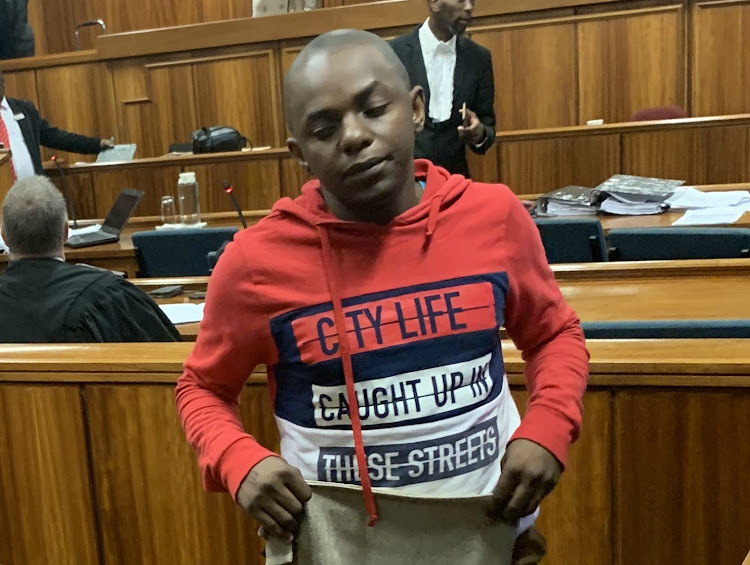 One of the four men accused of the brutal murder of a 76-year-old woman told the Port Elizabeth High Court on Wednesday he had been threatened with his life if he did not co-operate in the planning and execution of the house robbery which left Denise Webber dead.

Testifying in his own defence, Fikile Mengo, 27, said his co-accused, Sinethemba Nenembe, 33, had told him that if he did not give him his cellphone number and details of where he was working in Kabega Park, Mengo and his family would be murdered.

The threat was allegedly  made two days before the August 20 2015 incident.

According to Mengo, he knew Nenembe well as they lived in the same street in Kwazakhele and he had given out his contact details as he believed his life was in danger.

Mengo said that on the morning of August 20 2015, while standing on a street corner near his house, a third accused in the murder and robbery, Mkhuseli Ngqanda, 29, drove up to him.

“I asked [Ngqanda] where he was going and he said he was going to the vicinity of Makro because he wanted to drop off lunch for his girlfriend.

“I then asked him for a lift,” Mengo said.

While on their way to Makro, Ngqanda stopped and picked up Nenembe at his house, and another man, whom Mengo did not identify, near the Nangoza Jebe Hall in New Brighton.

After dropping off lunch for Ngqanda’s girlfriend, Mengo said, he had then directed Ngqanda to where he needed to be dropped off.

They dropped him and drove off.

Mengo said that about 30 minutes after he arrived at the Needham Street house he had received a call from Nenembe, who asked him how to access the property.

A short while later Nenembe and the unknown man had jumped over the perimeter fence and entered the property.

The unidentified  man had then gone inside the house and tied up the domestic worker while Nenembe went to find Webber.

After Nenembe went into the house he had called him inside and he had seen Webber tied up and laying facedown on the floor.

“[Nenembe] said if I go to the police he will do exactly to me what he did to [Webber],” Mengo said.

After items were carried out of the house and loaded into a waiting car, Mengo was allegedly put in the boot of the car and dropped off alongside the road.

Mengo handed himself over to police a week later.

The day after his arrest Mengo pointed out the homes of Nenembe and Ngqanda to police and made a confession statement which was accepted as evidence by the court.

They have all pleaded not guilty.