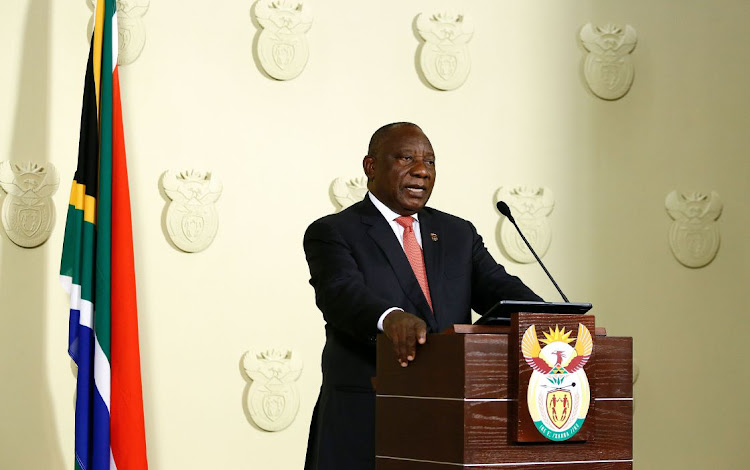 “We have decided to take urgent and drastic measures to manage the disease, protect the people of our country, and reduce the impact of the disease on our society and economy. We have now declared a national state of disaster.”

With those words, President Cyril Ramaphosa moved quickly and unequivocally on Sunday night to staunch the impact on South Africa of the global Covid-19 pandemic.

In a nationally broadcast address to the nation following an afternoon meeting of the Cabinet, Ramaphosa announced a raft of "extraordinary" measures to limit the country's exposure to the virus.

These include a travel ban on foreign nationals from high risk countries including Italy, Iran, South Korea, Germany, Spain, the United States, Britain and China from Wednesday this week.

Effective immediately, South Africans have been advised to refrain from all travel to and through the European Union and all the other high risk countries mentioned in the travel ban.

Ramaphosa said the government would issue regular alerts to specific countries and cities.

Any foreign national who has visited high risk countries in the past 20 days would be denied a visa, while SA citizens returning from such places would be subjected to testing and self-isolation or quarantine when they return home.

All travellers who have arrived here from high risk countries since mid-February will also be expected to present themselves for testing in SA.

STATEMENT BY PRESIDENT CYRIL RAMAPHOSA ON MEASURES TO COMBAT COVID-19 EPIDEMIC Fellow South Africans, I am addressing you this evening on a ...
News
1 year ago

Government will shut down 35 of the 52 land-based ports of entry effective today, with two of the eight sea ports closed for crew and passenger changes.

All non-essential government official travel of outside of SA has been banned immediately, and local travel is discouraged.

Gatherings of more than 100 people will be prohibited, as will be celebrations of key national days.

Schools will close on Wednesday this week and remain closed until after the Easter weekend, probably April.

The president said the virus constituted the greatest threat to SA in the democractic era but it had the potential to bring the country closer.

Speaking firmly and clearly, he said: "We have the means and resources to fight this disease."

Tensions were high across the country ahead of the president's announcement.

The number of cases in SA stood at 61 at the time of Ramaphosa's speech.

Port Elizabeth’s St Dominic’s Priory School is on high alert after a parent of two pupils at the school came in contact with someone who tested ...
News
1 year ago

In the Eastern Cape, Sunday started with no confirmed coronavirus cases yet reported in the province.

Higher education institutions and churches have already cancelled graduations and other formal gatherings.

The provincial education department has cancelled all international school tours and excursions till the end of May.

Rhodes University said it had decided to cancel the graduation ceremonies scheduled for the week of April 2 to 4, and events that may involve significant numbers of people from Makhanda and beyond.

“With immediate effect, all events which will involve significant numbers of people from outside Makhanda and it's immediate surrounds, which were to have taken place on Rhodes University campus between now and 30 June, are either cancelled, postponed, or converted to an online event," the VC said.

University of Fort Hare spokesperson Thandi Mabikade said on Sunday that the university was in the process of setting up a response team to deal with the virus. “On a daily basis, materials on precautionary measures are shared with staff and students. Because the numbers of infected people continue to rise, management may introduce other steps next week.”

BREAKING | Schools to close from Wednesday to stop spread of coronavirus: Ramaphosa

Schools will be closed and a travel ban will be in place from Wednesday as SA tries to curb the spread of the coronavirus.
News
1 year ago

WSU spokesperson Yonela Tukwayo said the university had already closed after major disruptions due to student protests this month. “At this point normal operational meetings have not been [held]. For now we have been running awareness and prevention campaigns through various channels. Only when operations resume will the relevant committee meet to take a decision about the May graduation.”

Eastern Cape health spokesperson Sizwe Kupelo urged residents against spreading false information after a social media post that a Chinese businessman and some employees at the Mdantsane City Mall were taken for testing on Friday afternoon.

“Its reckless to accuse people of having a disease without testing them, and even after testing no one has a right to disclose another person's health status. Can health professionals be allowed space to do their work.”

The Church of Jesus Christ of Latter Day Saints, which has about 65, 000 members spread across the country, cancelled all worship services in line with a global church decision.