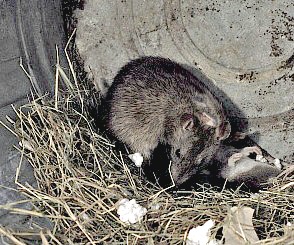 The rat infestation in Buffalo City can be traced to wide-scale illegal dumping and diminished budgets that require municipal bosses to do more with less.

Earlier this month, DispatchLIVE reported that rats “as big as cats” were running roughshod over the East London CBD and other parts of the city.

But minutes from a meeting in January this year show that when DA councillor Sue Bentley asked whether this budget increased annually, municipal health services senior manager Andile Falati told her it had decreased each financial year.

These minutes show that councillors expressed serious concerns about illegal dumping in the metro.

However, at the next portfolio committee meeting on February 12, when a vector control quarterly report was presented, the report showed that there were more areas being serviced than there were in 2017 — when more money was available.

Rats as big as cats taking over parts of East London

Rats are running roughshod over the East London CBD. The rodent explosion has become so bad that even homes beyond the CBD are being overrun, with ...
News
1 year ago

The report directly attributed rat infestations to high levels of illegal dumping in these areas.

Bentley queried how there could be so many more areas covered in 2020 than previously given the budget constraints.

Falati responded that the department was struggling to provide services to all the areas due to financial constraints and it tried to rotate vector services to the wards mentioned in the report.

Bentley was told the department of municipal health services had drawn up a plan to accommodate all regions of the metro and had recently appointed new staff members who would assist in covering all regions with the available resources.

Supply chain processes were in place to buy the pesticides needed, the minutes show.

Bentley told DispatchLIVE that with budgets decreasing, illegal dumping, and by extension rat infestation, was out of control.

“Municipal services also have no plan to fight the illegal dumping issue — there are warnings of fines and no illegal dumping signs all over, but nobody is held accountable when they are caught on camera,” she said.

“BCM have to make legal dumping easier and residents need to take responsibility for the waste they generate by putting it out on the right day. A lot of the dumping is household waste that BCM does collect.

“Another contributing factor is black bags haven’t been distributed for the last two years at least.”

BCM spokesperson Samkelo Ngwenya had not responded to requests for comment at the time of going to press.